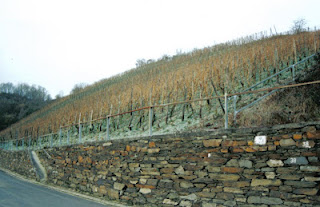 This month's winner hails from this great vineyard, Halenberg

Something kinda weird happened to a friend of mine last night and watching it unfold spooked me and made me want to get into the mystic. Which is always a good excuse to open a Riesling, right?

This is rather sweeter and a little more cloying than previously, as the acidity seems dormant, so the limpid fruit I usually find in Rheingau is even more pronouncedly limpid than what I find typical for Leitz. The nose is reasonably complex, with apples and peaches complemented by hints of petrol and mushrooms. It's a good, tasty wine, but at this time (or maybe it's just this particular bottle, with its wet, gooey and unpromising cork), it lacks the electric tension I've come to expect from Leitz. (Feb. 3, 2012)

I deserved this after a three hour drive each way, in a failed attempt to place Max, the 30 kilo dog we're fostering, in a new home. I guess the market for depressed eight year olds with sad, sad eyes isn't as large as one might think. Anyway, the En La Barre had a better performance. It's got typical Meursault nuttiness and typical Jobard minerality and acidity, and while quite forward on both nose and palate, it still retains some demure reserve. I've had some off bottles from Jobard, but when they're on, they're very good value for Bourgogne. This, while a bit rough around the edges, really works, with aromatic complexity, a solid grip, and savory salinity that culminates in a finish of cured meat. (Feb. 4, 2012)

Burgundy Wine Collection, 250 NIS at the time, 290 for the 2009 vintage. I know I get all those depressing misses with white Burgundies, but a good one like this is what makes me keep trying.

Okay, so this wine sure didn't last a long time at home. This was the last bottle out of three. I had a slight cold and was drinking a lot of soup and I figured the spicy, peppery nature of Gruner would be a good match. I was right. (Feb. 9, 2012)

Very nice, if not profound, Gamay fruit, with earthy notes and soft, lightly bitter tannins. I'm still not convinced the Flower Series has a lot of cellaring potential. (Feb. 10, 2012)

There's a bovine, rubbery, black pepper laden rusticity here that I associate with the less elegant northern Rhone AOC's (which Crozes is, let's admit it) and a surprising level of refinement in the dry, tannic finish complementing the the plump black fruit. (Feb. 11, 2012)

As always, the Halenberg showcases the purity and elegance of the Nahe (the German Saint Julien). The 2007 is especially light and ephemeral, with apples, melons and wisps of herbs and smoky minerals transmitting the vineyard's signature with great calm and restraint. In fact, it's so restrained and shy that it's almost Mosel-like in its demureness. This is drinking beautifully now - if somewhat monolithically, yet with great breed - but certainly has enough balance for a long stretch. The complex, understated aromatics by themselves mark this as a great wine, at the level of Prum and Donnhoff, and I'll bet my Leoville-Bartons that the palate will catch up. (Feb. 17, 2012)

Priced like a Gran Reserve, but labelled outside of the Spanish appellation system, this leans towards modernism, yet is loosely molded in an Old World template. Very Temperanillo, red fruit with accents of tobacco leaves and earth, savory tannins and a saline finish. Needs more time! (Feb. 18, 2012)

Here we go again. This bottle offers more subtle and complex aromatics than last month's bottle. And is that a hint of mushrooms? The palate is crisper and more savory, while retaining a typical lean disposition. It's still on the simple side, but, man, Mosels can be so delightful! (Feb. 23, 2012)

Black fruit with hints of pepper and earth on the nose and hints of chocolate on the palate. The fruit is dense and sweet (not over-ripe, though), but at little loss of finesse and it's complemented by pleasantly drying and spicy tannins, whose savoriness somehow recall Bordeaux. I don't know how it will age -  it's Carignan after all, but I'm optimistic because it has this aura of uniqueness - but it's precious and delicious now. I guess I'll have to get another bottle or two, that's all. (Feb. 25, 2012)

I also tasted Efrat's cooking wine, which had surprised me at a wedding earlier in the month:

Surprisingly tasty and characterful, given its price, sporting cranberries with a green streak that comes across as herbal as opposed to making the palate stingy. (Feb. 25, 2012)