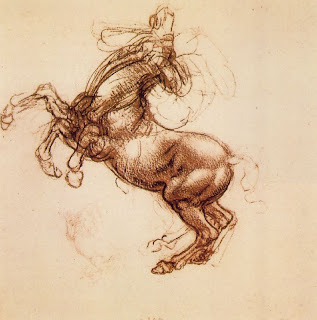 They say the story, hope it don't bore ya
about they day I was a horse  (The Vaselines)
Georges Dubeouf, Fleurie, Flower Label, 2010

I've had this wine with friends on numerous occasions and I promised myself that once, just once, I'd drink it alone at home and study it in detail. And the results are in. On the nose there is predominately black fruit, tell-tale cardamon and enough poop and leather to hint at brett. The palate is quite tasty, with sweet, not-too-ripe, fruit tempered by savory tannins. In short, my detailed study doesn't add greater depth or nuances to the mental picture I'd already built for this wine, indeed for Arroyo in general, and doesn't elaborate much beyond previous notes. So I guess all there's ever been to this wine is rugged yumminess, with Old World breed and mystique. And it tells a story. Always a plus. (Jan. 7, 2012)

Giaconda, 225 NIS. Maybe I need to revisit my first Ribera flame, Condado de Haza, to see how a 'base' wine that I haven't drunk in years compares to this obvious high-breed.

This is one of the few dry Pfalz Rieslings that has me convinced, spicy with a fascinating mineral vein that imbues the nose with a sense of locale - not a locale that I could place on a map (although I'm pretty sure I could find the Pfalz with a couple of tries), just a sense of a wine coming from somewhere specific. Despite the "trocken" designation, the palate has such vivid freshness that the fruit feels sweeter than it probably is, without feeling riper than a Riesling ought to be. (Jan. 11, 2011)

The fourth and final bottle of one my house reds greets me, upon opening, with aromas of beets and upturned earth, these closely echoed on the palate. A touch of sous bois as well, good stuff all.(Jan. 12, 2012)

Seeing as I'd just drunk and written about this, another tasting note would be rather superfluous, so let's talk about the food match. We had this with spicy Asian (from Zozobra) and I knew it would be a great pairing, what with the pepper and papaya/green peas combo on the nose and the interaction of salinity and sweetness on the palate.

This made me think how inappropriate the local wines are. I used to think Rieslings would work with this kind of fare, but you'd need a lot of mineral flare, which the local attempts don't produce. Same for Israeli Gewurtz. The local Chardonnays are too round for the most part and even the best just wouldn't have the right mouth feel (actually, Pelter's Unoaked is kind of tropical and might work, except it's not spicy enough). A Sauvignon Blanc might do the trick, but in the end, the only local candidate would be Sea Horse's Chenin Blanc. But I'll still stick with Ecker. (Jan. 13, 2012)

Obviously Southern Rhone from the first whiff and sip, as the garrigue and ripe fruit attest. Now, 15% ABV isn't my first drinking choice, but at least here it's subdued by the fruit, so the overall effect is lush, ripe, sweet fruit with dusty tannins and not an alcoholic bomb. We had with cholent for lunch, which was apt, but since it's not an easy wine to finish off at lunch, a couple of glasses survived until evening, when it showed more minerals, especially iron. The final glass was especially complex, as the herbal and mineral notes combines for an interesting interplay. (Jan. 14, 2012)

This time, there is a minerally-citrusy overlay that recalls Chablis (in my first forays into GruVe territory, five years ago, I thought the grape a quirkier version of Chardonnay, so the resemblance here is an apt one). The palate is deceptively simple and round (deceptive because I've seen what it's capable of and am on to its tricks) and very gulpable, with an inviting saline finish. (Jan. 16, 2012)
Wine Domains Of Austria ,129 NIS


This is 'only' a VDP due to an infringement of some AOC law or another (actually, this is half Syrah, half Cabernet Sauvignon, while the maximum Cabernet allowed under the AOC rules is 20%). A touch of brett on the nose, but the palate is more polished than I'd thought, excellent albeit a little monolithic in its excellence. Warm fruit, as opposed to ripe, which I think is the key to the charm of South France. A riddle I'd like to spend more time deciphering. (Jan. 23, 2012)


Giaconda, about 350 NIS. More than I'd spend on a Chateauneuf, which is what I'd figured to be the proper yardstick, but then it's more refined than most CdP's I've had in recent years.


Mosel Rieslings, especially Kabinetts, are like Smokey Robinson tunes: light confections, but insanely captivating ones. This here is classic apples and slate, with tints of petrol and even clay, and very racy and refreshingly sour. (Jan. 26, 2012)


Imported by WineRoute, where they're typically sold for about 120 NIS before discounts (and you can be certain they'll always be wind up being offered on some discount or another). Wine Depot still has a stock of 2007's for 109 NIS.


Since I write about every single bottle of wine I drink or taste and since I drink a lot of Chablis, it's hard to come up with too many novel ways to describe the same experience, yet Chablis is important enough for me to try. This is the textbook, secret blueprint that the land, grapes and winemakers are weaned on. The nose is convincing it its salty attack while the palate adheres to the Hugh Johnson adage that Chablis should be "full but tense, limpid but stony". (Jan. 31, 2012)