Vougeraie is not considered a very chic property, although it has some pretty good fruit at its beck and call. A third of this village wine, for example, comes from premier cru Les Baudes and some of the other four plots it's sourced from lie close to the Chambolle Grand Crus. It doesn't show the typical floral character of Chambolle, but rather the exotic spices one would associate with Vosne, with a touch of dust and earth. It's very flavorsome and deep for for a Village wine, with a complex texture. Opened three-five years too early, but it's very good, even now, just not very typical. (Oct. 25, 2020)

Moreau is a Chassagne domaine and this feels like a lo-fi Chassagne. I wasn't able to find out where the grapes come from, but if they're from plain Bourgogne vineyards, then I presume they come from the vicinity of the township. It's a fun wine, with the the pear and dry grass nose typical of Chassagne, and a rather lean body, but I have to admit I've had better Bourgognes. (Oct. 19, 2020) 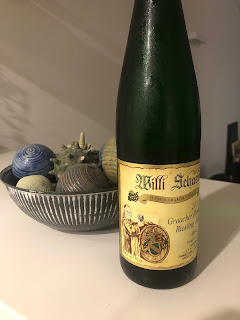 This is never quite as deep as Schaefer's Dombprobst, but the nose is quintessential Mosel, somehow evoking green apples as well the cold of the vineyard in winter. The palate is racy, with a pungent, green apple finish. (Oct. 21, 2020)

White Rhone grapes are hardly what I consider the great wonders of the wine world, but Rousanne is arguably the best of the lot (yeah, much better than Viognier). It's idiosyncratic without going off on unappetizing tangents. Oh, you know what I mean. We've all been poured some weird, funky wine that made us go "wow" until we realized it was a one-dimensional, one-hit wonder, whose dirty funk was more dirty than funky. But this Rousanne marries the strange with the mundane, melons, wax, rocks and nuts drawn against a somewhat neutral background, where the acidity delivers a sneaky jab. (Oct. 28, 2020)

This is the Carignan in Avi's portfolio and shows a peppery, fiery side of the grape, with hints of garrigue and truffles. In retrospective, I wish I had tasted this side by side with the Grenache. The comparisons would have been striking. The two are like parallel paths, continually diverging and converging, the Anu coming off somewhat rounder and more welcoming. (Nov. 1, 2020)

I always feel this proprietary red blend is the wine that most recalls Avi's style from the old Segal days, a rich, warm wine, but with no loss of freshness. The actual flavors and aromas are different, because Avi had never attempted a blend like this in the old days. In fact, no one has ever made a blend of Syrah, Carignan, Argaman, Cabernet Sauvignon and Viognier. You'd expect that in a blend like this, the varieties would pull in different directions, but the end result is, to me, Avi's most accessible red. (Nov. 3, 2020)

Flowers, lead pencil, even hints of charred meat. My personal history with Vitkin was: the Carignan drew me in, the Petite Sirah won me over, the Grenaches expanded my horizons before I circled back nd re-discovered the Cabernet Franc. I discovered it two years ago, with the 2014 vintage, which only opened up the next day. Since then, I'd been aging the 2015. Since it wasn't a good vintage, I'd hoped a couple of years would get it past the corner, but I was wrong. It's still cloaked by a sweet veil of oak and turns pruneish in time. I have a bottle of 2016 which I will open only in 2023, if I am able to manage temptation and fridge space. (Nov. 6, 2020)