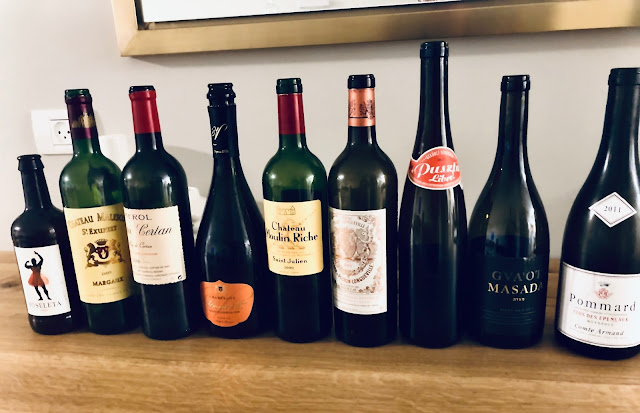 And the basics, as always, is Bordeaux. And Champagne. I'll skip over the night's warmup wines, except for one warmup, whose failure hit me especially hard.

This property is a consensus in every Burgundy primer, textbook and site. I've had the 2006 and 1993 (!) in the past and they were excellent classic and very memorable. Muscle and iron-bound, not typical Bourgognes (even by the standards of Pommard, a very muscular and masculine Pinot town), but very memorable. Since 2011 is a relatively timid vintage, I expected the wine to be approachable with air, so I gave it a few hours of air, lowered shoulders - everything but time in the decanter. It stayed closed, yet earthy and gentle, with savory acidity. It started to show iron and I was quite optimistic when left the bottle standing. But that's where it stopped and shut down - hard. I suspect the competition scared it off.

What's it going to take until my other bottle emerges from this slumber? A decade for a mid-tier vintage like 2011? And what am I going to do with my bottle of 2008, let alone the 2010?

Last year, the 2011, a lesser vintage, struck me as not quite ready (although, in retrospect, I question whether it simply had less to offer), but this rosé Champagne from a master of Pinot Noir is geared up to show all its splendors. It's a long, deep, moving wine, with the autumnal character of a great Pinot (forest floor, earth, mushrooms), filling the palate with complex, umami flavors.

Served blind, some though it was a mid-80's Bordeaux, I thought 96/98 and someone nailed 2001. It's not getting long in the tooth, but rather showing a state of comfortable maturity as opposed just having emerged from adolescence. The tannins are now very well integrated, and the nose is wonderfully detailed and delineated, with iron and earth notes.

Malescot is always a very sexy, opulent wine, with enough tannins and form to counterpoint the opulence and make an even more effective impression. The 2005 is ready to roll.

The 2008 I opened a few months ago never quite opened up in full, but this sure has. 2005, like 2000, produced wines with no discernable flaws, at their best, but it's hard to find reviews claiming the wines have the same magic. The Malescot has magic, the Certan settles for charm. It has a very elegant nose and palate, balancing fruitcake and spices.

This used to be Leoville-Poyferre's unofficial second wine, but in 2009 Poyferre started selling an official second wine and this became it became a separate property outright. It was always produced from separate parcels anyway. The wine was overshadowed and overlooked during dinner but there enough fresh remains in the bottle to provide a decent drink. It has the silky Saint-Julien tannins and acidity and it's richer than I expected, with spicy, slightly meaty, black fruit. Very good.