I really enjoyed the 2014 version, but it was not quite as good as the knockout 2017, with its sexy fruit, joyous acidity and the deep, sappy substance of a village wine. It's not a declassified village wine, though. If I read the domaine's site correctly, it's a blend of 19 different plots. My guess is there are some village vines in the mix, but nothing so prominent so as to point to a specific village character. Some Morey minerality, more dominantly a touch of Chambolle flowers and finally maybe a touch of Gevrey sauvage. The right food highlights a tangy, maty bite on the finish. (Oct. 15, 2020)

This lovely creature, on the other hand, is a village wine that walks like a Premier Cru. It comes from Comblanchien (which technically never got its own AOC) and borders the Clos de la Maréchale Premier Cru in Nuits-Saint-Georges. While geographical affinity is not a guarantee of anything in Burgundy, this does have the nuances and complexity of a Premier Cru and I think you'd actually mistake it for a Nuits, blind. I could list the descriptors - red fruit with a shade of black, forest floor, minerals and then violets after a couple of hours - but the character of a specific village is always just more than a set of flavors. Anyway, Nuits used to be written off as rustic, but it's become more elegant in the current century. And this is as elegant as a latterday Nuits, with a savory finish that carries the wine beyond simply tasting good. (Oct. 16, 2020) 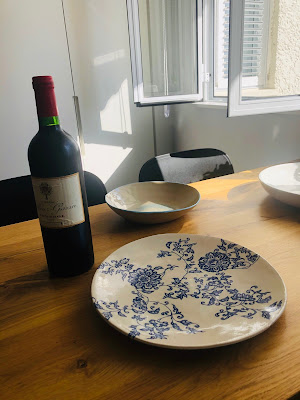 The next time someone describes Left Bank Merlot as a spicy fruitcake, ask them for a glass of a Lafleur-Gazin. That way, you won't have to pay for it yourself. There's a lot to commend it: the way the iron notes on the nose complement the spicy fruit-cake; the lean, classic form; the palate-cleansing finish. It's just not especially expressive and it lacks heft, stuffing, muscles. A bit of a dullard. When I bought the 2009 seven years ago, the shelf price was 290 NIS and Wine Route offered it on discount at 220, which is a decent price, all things considered. But by the time we ever see these prices again, if we ever see them, it will be too late for me. (Oct. 11, 2020)

Sémillon is rightfully making a strong local impression over the past half decade. There's a calculated bit of reduction here, highlighting the minerals that drape the smoky melons typical of Sémillon. Toledo has been getting very good reviews, but to me this wine is just a way station and not the final destination. The nose is excellent and the palate shows a good balance between bittersweet pear flavors and slightly salty ones, but I get the feeling it could have been a bit riper and more saline at the same time. On the other hand, I've been drinking a lot of cool imports from the Loire and Bourgogne brought in by hipster importers this year, and I swear that in a blind tasting I'm not sure I'd call this out as Israeli.(Oct. 12, 2020)

There are dozens of so-called "Mediterranean" blends around these days, in Israel. Gaby Sadan's entry is one the most decently priced and it's one of the few that capture a herbal aroma reminiscent of garrigue. It's tasty with a slight sweetness that's never offensive and it's rightly a hit at restaurants. Lastly, it fared well in the troubled 2015 vintage. (Oct. 13, 2020)