Piedmont hasn't had a disastrous harvest since 2002. Even the mediocre vintages were decent and offered forward, early-drinking wines as compensation for their faults. 2015 is considered a solid, very good vintage with the benefit of a warm summer making the wines relatively approachable young. But I say that based on reading up and catching up with friends who know more about Piedmont that I do. I basically offer more love and intuition than experience every time I write about Piedmont.

But I do love Piedmont and I thought I'd broaden that knowledge by opening a few 2015 Barolos. Only the regulars, though. God know I won't be opening any crus soon.

I'll start with the highlights. Oddero, Marengo and Brovia were my favorites: nunaced and expressive. 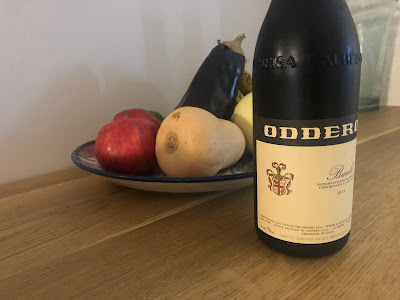 I first bought Oddero seven years ago. I was on a business trip to London, putting in 14 hour work days, and the possibility of hitting my regular wine stores seemed low. We stocked up with sandwiches each morning at Waitrose, whose wine departments put many local Israeli stores to shame and that's where I scored my bottle. Oddero has been an and off purchase ever since and I really enjoy its Old World charm when I have a good bottle in its prime (or approaching its prime). This is at least on par with the two other vintages of the normale I've had (2007, 2014): already very pleasurable and nuanced, an Earl Gray/tar/black cherries character. (Sept. 19, 2020)

A new producer for me. Their basic Barolo is sourced from four different La Morra vineyards. The nose is initially ripe and alcoholic, but quickly settles down and smooths out to show iron and earth, a hint of roses later; quite expressive for all its youth. Meanwhile, the palate has good balance from the beginning, the fruit savory and surprisingly delicate at that. Lovely. It's the readiest of the lot, I expect it will gain refinement in the short term and keep for 5-10 years. (Sept. 25, 202) 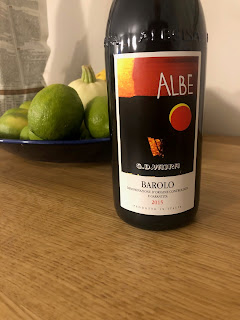 I can live with tannic grunge of young Nebbiolo wines as long as they don't block the wine's expressiveness. The tannins here are still fierce, but they're not harsh or bitter, rather sour and astringent. Both nose and palate convey one of my favorite aspects of Piedmont. I referred to it in the past as sour cherries sauteed with truffles. This a rambunctious version of that effect, but it does its elegant side and I think this, Vajra's entry-level or "village"-level Barolo will show more nuances in three-four years. In the end, this was an interesting, enjoyable drop - for what's usually considered a workhorse Barolo. (Sept. 4, 2020)

This is a blend of the younger vines from Brovia's holdings, so it's mostly Castiglione Falletto and some Serralunga d’Alba. I've drunk 2011 and 2013 at roughly this same age, to my great enjoyment. I won't argue with anyone who says this needs at least three-five years, but it's drinking great already. I find the depth and complexity impressive even now - and the black cherries and truffles on the nose are utterly beguiling. The overall effect and character echoes that of the Vajra Albe, but the Brovia is more refined. If I were to score them, they'd be 90 and 91 points, but that single point would make a big difference. (Oct. 17, 2020)

This is the sweetest of the 2015 Barolos I've tasted this summer. I don't mean that it's overripe, not by any means. The tannins are rusty and savory, and they turn the palate into a broad tasting board of dry cherries and roses and tea grains. Despite that, and in spite of the depth it gains after four hours, it doesn't show the Vajra's power, the Oddero's nuances or the Mergengo's subtle delicacy. But here's another way of looking at what these Barolos have to show us: The Fenocchio is young Monforte d’Alba fruit, the Vajra Albe is sourced from the Barolo commune, Marengo from La Morra, while the Oddero and Brovia are a blends based on Castiglione Falletto (with La Morra and Serralunga, respectively). Maybe we should just enjoy them and study their characters instead of judging and making quality calls? (Oct. 1, 2020)

I like Freisa but I've really only tasted Vajra's version (which I found harsh when I tried it a few years ago, but I know my tastes in Piedmont have changed a lot since) and Fenocchio's, which I have always found lovely. In some vintages, the Fenocchio version has struck me as Piedmont's Gamay, but the 2017 really has the tannic structure of a mini-Barolo, as well as a similar earthy/truffly character, albeit matched with sweeter fruit. (Sept. 12, 2020)