No, no, by the hair on my chinny Chinon! 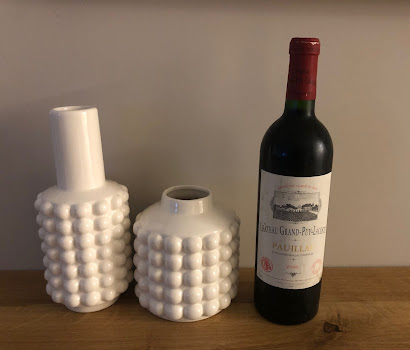 In many ways, beyond the scope of this post, the grape varieties originating in Bordeaux, have created a love triangle for the ages between the Right and Left Banks and the Loire.
Château Grand-Puy-Lacoste, Pauillac 5me Cru, 2000
A wine of elegance and succinct statement - with a precise balance of fruit and tannins, iron and earth. It's a wine I've been holding on to for a decade for my daughter's 20th birthday. Only Bordeaux could make that a no-brainer decision - this wine could easily go another twenty years. No one will claim Grand-Puy-Lacoste is a superstar property, exactly, but the greatness of Bordeaux is how fine the second and third tiers can be. While it might lack the depth of the big stars, a good GPL would pop the eardrums of any wine lover tasting Bordeaux for the first time, especially in a great vintage like 2000 - the aromatic complexity, the savory set of flavors, and, finally, the way the grainy tannins cleanse the palate without astringency. I did expect greater depth and sexier fruit, given recent experience with 2000's that seem to have started hitting their stride.
Château Certan de May, Pomerol, 2008
A great Bordeaux vintage evokes the image of a very able, upper-class businessman putting on his best, very expensive, tailor-made suit. With the very great vintages, the suit is worn so well you don't even notice at first how expensive it is. 2008 is not as great as that, but it still wears some very fine livery. This is my first Certan de May and, based on the showing of the 2008, it impresses me as a notch better than Grand-Puy-Lacoste. The palate is certainly at least as fine, and in a lesser vintage, at that. I think it's a year or two past the start of its plateau. The acidity is very good, the tannins are integrated, still conveying a grainy texture, though. The nose shows earthy, black fruit that is only starting to reveal the spicy fruit-cake personality of a fine Pomerol. On the whole, it feels like at any minute it might open up to show more, but never does, so I'd wait at least five years.
And then - this came along!
Domaine Bernard Baudry, Chinon, La Croix Boissée, 2010

The 2011, a less heralded vintage, was in such good form and balance a few weeks ago, that I decided to grab the 2010 as well. As it turned out, it's made of richer cloth, so rich in fact that the tannins are buried deep within the fruit. While I loved the 2011's relative austerity - and, in some ways, it was more typical - the 2010's makeup makes for a sexy wine on par with, say, a fine 2000 Bordeaux, with a similar impression of depths just waiting to be combed in decades to come. I am also grateful that it also has enough Cab Franc red fruit and lead pencil for typicality's sake. I should have kept another bottle in the fridge, but in its youth, today it stands up to the two vaunted Bordeaux above - the GPL has more savory tannins and the Certan will race ahead in the future, but it's certainly a decent fight right now. (Aug. 29, 2020)