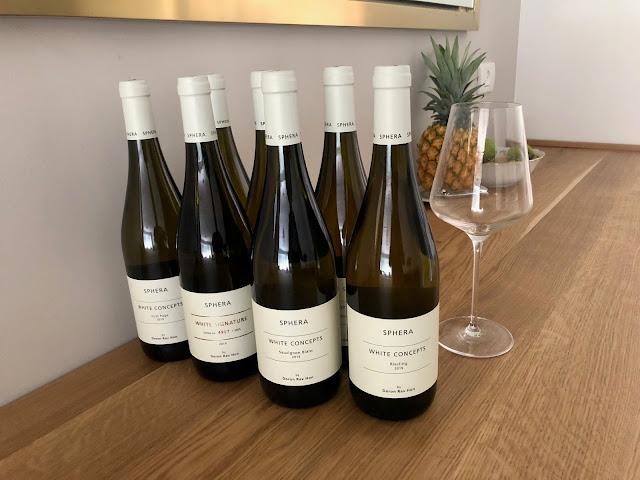 Sphera, as every wine aficionado in Israel knows, is the only winery dedicated solely to producing white wines. I'd been following the winery since it's first vintage, 2012, but this was the first time I'd ever visited. Although we arrived in the midst of the Friday noon client thoroughfare, Sima and Doron Rav Hon were kind enough to sit down and talk us through the portfolio.

Doron first came to prominence during his tenure in Ella Valley Winery at the turn of the century. Even though he didn't specialize in white wines at the time, his Sauvignon Blanc was the leader of the pack at the time. He also made a hot Semillon, which in hindsight is a great clue to where he was heading, given its importance these days in the flagship White Signature.

I think I could spot The Sphera wines blind. They all have a telltale whiff of rain water and wet leaves - Doron agrees, although his descriptors were slightly different. He can't explain it, so I can't either. He always aims at a certain balance of flavors and aromas, so presumably the scents we both pick up are a product of that specific sweet spot.

I think at this point, like many of his peers, Doron will offer a fine set of wines each year, unless there is a major weather disaster. There will be subtle improvements. Vintage variations will be telling, but these will also be relatively subtle. The main difference will be which of the straight varietals will shine brightest (the White Signature is designed to be the best and it always is). This year, the Riesling was the best, followed by the Chardonnay and then the Sauvignon Blanc.

Sauvignon in general is the Israeli wine most likely to surprise outsiders. It's very floral and direct this year, with an obvious overlay of chalk. I thought New Zealand as soon as I sniffed and drank it. It's not the best wine in the lineup this year, but I think it's the crowd-pleaser.

The rainwater signature is most obvious here, accompanied by the dry grass notes typical of the southerly appellations of Bourgogne. It's the wine that best shows Doron's growing understanding of his grapes and terroir.

Showing more complex than any wine this year, including the Signature, actually. A further surprise is the relatively background role the fruit flavors and aromas play here, the dominant character being earth and nut oil. To sum, it's becoming more and more Sphera and Rav Hon each year, while cementing the claim that some Israeli Rieslings are carving out a niche of their own.

As the blend has been changing since its inception, it's hard to generalize about vintages here, but now it's starting to stabilize as a Chenin Blanc dominant blend (50% Chenin, 30% Rousanne, 20% Semillon), which I think shows in the ripe melon character, There are also notes of dry grass a la Chassagne and on the whole of it, the First Page has taken a major step forward.

Another great success for a wine that justifies its flagship status, year in and year out. This year it's 90% Semillon, the rest Chardonnay. Doron says it's the highest percentage of Semillon so far, which surprised me - I was sure previous vintages were already 100% Semillion, but no, they had been 60-80%. It shows a lovely reductive character perfectly complemented by the clear fruit. Doron says that when he get this sort of reduction, he just wants to spoon the barrels to prevent any changes or mishaps. It's very fleshy and flavorsome, with a fine structure.

Doron also opened a bottle of the 2015 Signature , where that reductive funk has developed into sweet spiciness that made me expect a dessert wine, even though the palate was perfectly dry, albeit bold and ripe. I think it deserves more time and contemplation, so if you have a bottle cellared away still, I think you'll get a lot of enjoyment out of it.