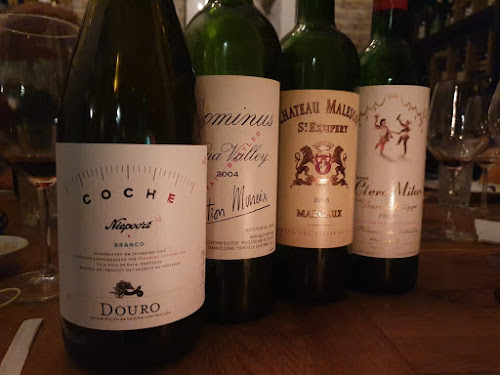 I was sitting next to Haidu. Haidu is the greatest taster ever and he remembers everything he has ever drunk and he knows everything about the vineyards the wines came from. I don't even try to match that. If there's a thing I think I'm good at, it's interpreting what's going on in a wine and placing it in some sort of context. It's never totally accurate, it can't be; by definition and inclination, I aim at the personal.
This was one of those nights. Lots of wines, many generous friends, a great vibe. Friends drawn together by a common love for one of the greatest gifts that mankind has ever given itself.
Niepoort, Duoro, Coche, 2018
This is a blend of local varieties, Rabigato, Códega do Larinho, Arinto and others, vinified in a Burgundian style. The oak is obvious on the nose but works well there. It serves as a backdrop to the fruit and flint. It's more oaky on the palate, but it's obviously so well-made, the fruit of enough quality, to age well until the oak is full subdued. Right now, it's not as intense and exotic as Duoro whites can be with age. I'm glad I got a chance to taste this, because the bottle of 2015 I opened a few months ago was obviously off. The wine is aged for a year in barrels, half of them new, which just goes to show that barrels in themselves don't make a wine oaky: what makes a wine oaky are stylistic choices and the skill - or lack thereof - to pull the choices off
Domaine Dubreuil-Fontaine, Corton-Charlemagne, 2014
Very flinty, precise and concise. Excellent winemaking putting very expensive real estate to good use. Not as heady  as other Corton-Charlemagnes I've tasted over the years, and that's something I appreciate.
Domaine Henry Gouges, Nuits-St.-Georges Premier Cru, Porrets Saint-Georges, 2006
Unsurprisingly, it was quite a challenge to drink Gouges from a vintage like 2006. The things limited storage makes me do. Starts out closed with black fruit, lots of iron and very drying tannins. After half an hour, it shows more complexity and forest floor. That was as close it ever got to a sweet spot and it showed as overripe as it aired more.
Dominus Estate, Napa Valley, 2004
Someone was very generous to spoil us with a very expensive bottle of olive-flavored toothpaste. Because it was served blind, I never had a chance to raise my expectations. Now, I realize I'm either coming off as nasty or riding an anti-Napa trend, but it was truly an unappetizing wine and that's what my note is trying to convey.
Next up was a flight of 2008 Left Banks. Without going heavy on the hyperbole, can life offer many finer treats or distractions?
Chateau Branon, Pessac-Leognan, 2008
I was told by a very knowledgeable source that this is the Haut-Bergey's premium cuvée, and even though the internet is silent on the matter, it does remind me of Haut-Bergey's style, which is a mixture of the classic with the modern, black fruit of high extract (but not excessively so), rocks and graphite. Haut-Bergey 2008 is hitting a very nice plateau and if this is indeed the premium version, I'm a little surprised it doesn't need more time. But when I think about it, the next two wines,
Chateau Leoville-Poyferre, Saint-Julien 2me Cru, 2008
Very Saint Julien. Everyone should have a favorite Saint-Julien and if this is yours, you won't get an argument from me. This is showing as classy, elegant and balanced, with savory currants and a touch of minerals.
Chateau Malescot-Saint-Exupery, Margaux 3me Cru, 2008
For some reason, I never, ever, bought a Malescot of my own, but I always love it when my friends open a bottle. The 2000 was an opulent, exotic gem, and this isn't far behind, maybe less precise, though.
Chateau La Conseillante, Pomerol, 2006
The second staid 2006. An elegantly crafted wine, its spicy black fruit culminating with a finish laced with coffee grains, but without the charms of Left Bankers on the table tonight
Chateau Clerc Milon, Pauillac 5me Cru,1989
Clerc Milon is always a fine wine, although it would be fair to assume that it's the kind of wine whose greatest fans are its owners. But it's a classic and ages very well, as this bottle shows. This is the best Clerc Milon I've had, perfectly poised, showing a great balance of fruit and minerals and iron.
It would be fair to say we covered all bases except for Saint-Estephe and Saint-Emillon. Nice night.
Chateau Clerc-Milon Chateau La Conseillante Domaine Dubreuil-Fontaine Dominus Estate Henry Gouges Leoville-Poyferre Malescot-St-Exupery Niepoort