July 13, 2020
Domaine Olivier Guyot, Chambolle-Musigny Premier Cru, Les Fuées, 2013
Even after a time in glass, the nose still shows earth and iron that are more akin to Morey than Chambolle, while the palate has a moreish, sultry softness that contrasts nicely with the persistent tannins and acidity. It's a long, deep, detailed wine, with an open-ended structure that frames the fruit in mid-palate but allows it to unfold on the finish. It drinks like a Chambolle-Musigny and after two hours, the nose starts to show the floral accouterments you'd expect from a Premier Cru from the village. A solid plus plus Premier Cru. (June 5, 2020)
Domaine Hubert Lignier, Chambolle-Musigny, Les Bussieres, 2015
This, too, with its damp earth and tart, black raspberries, made me think of Morey-Saint-Denis. I didn't drink it blind but for some reason thought it it was a Morey and went, "hmmm, how typical". When I realized it was a Chambolle, I still thought it smelled and drank like a Morey, so I don't think it was a matter of the label setting expectations.
I think this map explains it all: 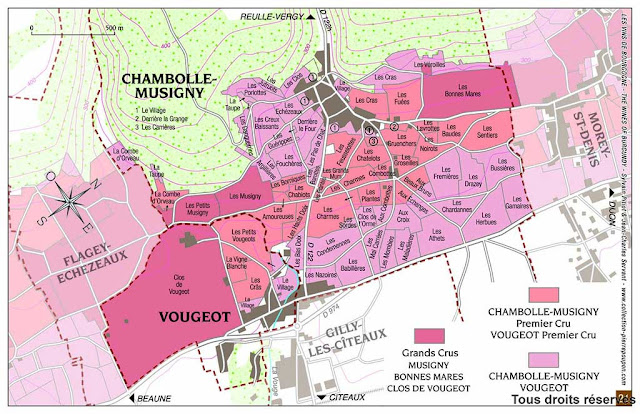 The flowers did show up later on. Also, some warm vintage character. Anyway, one of the best village wines I've had recently, which is what I'd expect from a great name like Lignier. Reading over my notes for Lignier over the years, the village lieux-dits have always been overachievers. (June 6, 2020)
Le Domaine d'Henri. Chablis Premier Cru Troesmes, 2015
One of the things that have always impressed me about d'Henri is the purity of fruit. The sea weed/sea shell/iodine character of Chablis is there, but the fruit feels as clear and crystalline as a Puligny. Even in a warm vintage like 2015, there is no loss of tension and grip. There's no loss of complexity and nuances, either; as the fruit travels from citrus to pears and apples, it doesn't attack the senses so much as weave through and around them, to a glorious, moving effect. One of the best Premier Crus I've had in years, at least since the last Henri tasting I attended. (June 15, 2020)
Domaine Fourrey, Chablis Grand Cru, Vaudésir, 2015
This, on the other hand, didn't fare as well in the warmth of the 2015 sun. Maybe the Grand Crus' exposure was too much of a good thing in a year like that, or maybe the Fourrey team isn't as talented as Henri's. The Vaudésir has a grand body and Chablis typicality, but not much in the way of finesse, complexity or texture. A shame. (June 17, 2020)
Domaine Hubert Lamy, Saint-Aubin Premier, Cru Clos de Meix, 2014
All other things being equal, 2014 is the white Burgundy vintage to get. This actually seems to be still somewhat in a shell, but the quality of Lamy's vineyards and craft is such that even the shell is intriguing and inviting. It's a racy, flinty wine, with pedigree and focus worthy of Puligny (you can understand by now what my benchmark is). The reason I say it's in a shell is because it needs a couple of hours to show how broad an expansive the flavors are. But the nose is complex and beguiling and the finish is long and invigorating and so savory and saline that I can't put the glass - or bottle- down. And lest I forget to explicitly point this out, the acidity is to die for. (June 26, 2020)
Domaine Hubert Lamy Hubert Lignier Le Domaine d'Henri Olivier Guyot