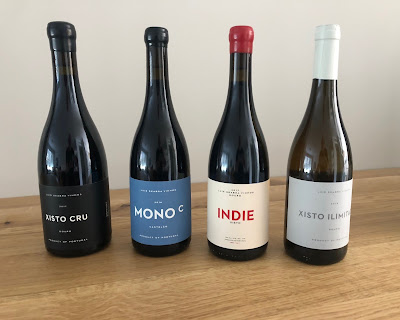 I'm a fan of Niepoort. It took me  awhile to come around, but I'm a fan now. For a long time, though, I had no idea who did what in the organization. Last year, I learned that the chief winemaker had left a few years ago to start his own venture. I found a nice quote by Dirk Niepoort that says he expected that the learning curve for Portuguese table wines would be about twenty years. By my reckoning, that's just about when Luís Seabra, said chief winemaker, left.
The way I learned Seabra was Niepoort's chief winemaker and had left Niepoort was that Itay Gleitman mentioned it in a Portuguese tasting he held in October when he presented Seabra's Xisto Cru 2016 red. It caught my interest and I awaited for its arrival in Israel via Dani Galil's portfolio. To be quite honest, I had forgotten all about it until Seabra's wines started popping up on my Instagram and Facebook feeds and then I found bottles at the Wine and Flavors shop.
So, here we are then. Tasting notes galore.
Douro, Indie Xisto, 2017
Niepoort's web site has tons of information. Every one of the dozens of wines Niepoort makes is described with almost fanatical attention to detail and organization. Seabra? Not so much. I had to hunt down details at the wine stores who carry Seabra. Lots of details, just no single repository for them.
I learned that the Indie is made from a barrage of grapes from a single, high elevation, blue schist vineyard (unlike the more expensive Xisto Cru, which is made of grapes from multiple blue schist vineyards). The vines were planted in 1950 and the grape composition is as follows:
30% Tinta Roriz,
30% Touriga Franca,
10% Tinta Amarela,
5% Tinta Barroca,
5% Rufete
5% Touriga Brasileira,
5% Donzelinho Tinto
5% Malvasia Preta
5% Touriga Femea.
I'm sure their own mother can tell them apart.
The result is fruity and tasty. I want to make that clear straight away. This is a tasty, fresh wine, with very pretty floral and mineral notes, and anyone who drank it at a seaside bar and didn't feel that life is just smashing doesn't have a heart.
It just isn't very complex. It reminds me of Niepoort's Dialogo red. I bought a few bottles of the Dialogo to open for friends, but I never feel an urge to open it when friends are not over (whereas I'm willing to open the Dialogo white almost every day). And this is at least one third more expensive than the Dialogo, thanks to Seabra's emerging cult status.
Let's just call it Seabra's hipster bistro wine.
Douro, Mono C, 2016
Made of 25 year old Castelão vines from  a vineyard in Oliveira, east of Peso da Régua in the Douro. Apparently, Castelão  is the second most widely planted red grape in Portugal. I admit that fact surprised me, but maybe the list of grapes synonymous with Castelão that I found on Wikipedia sheds some light on this:
Bastardo Castico, Bastardo Espanhol, Castelana, Castelão Francês, Castelão Real, Casteleão, Castellam, Castellão, Castellão Portugues, Castico, João de Periquita, João de Santarém, João de Santarém Tinto, João Mendes, Joao Pinto Mendes, João Santarém, Lariao Preto, Mortagua, Mortagua de Vide Branca, Olho de Lebre, Perikvita, Periquita, Piriquita, Piriquito, Pirriquita, Santarém, Santarém Tinto, Trincadeira.
Wikipedia also says that the grape  thrives in sandy soils but is able to adapt to a variety of conditions. It also seems to adapt its name handily enough to confuse the authorities.
"Senor, what do you grow in your vineyard?"
"Perikvita."
"Periquita?"
"No, Perikvita."
"Piriquita?"
"Perikvita."
"Piriquito?"
"Perikvita!"
"Never mind, I'm writing down Castelão."
"Okay."
The wine itself is much more expressive and interesting than the Indie. The aromas of fresh raspberries, pungent earth and pencil shavings will remind anyone who ever fell in love with a Beaujolais Cru or Chinon of the first pangs of infatuation. The palate could use more depth, but the tannic grip and texture on the finish are captivating and promising. With air, it takes a somewhat surprising turn, though. It grows more complex, but at the same time hotter, and picks up a herbal tint that I peg as Iberian, if not outright Portuguese.
Douro, Xisto Ilimitado Branco, 2018
At their best, Duoro whites are intense, exotic and smoky.  And this is Duoro showing all the pure, exotic, brilliant fun it can provide, conjuring up melons and oranges washed ashore on a faraway beach and sprinkled with magic sand and salt. The fruit has the sweetness of grapes raised in a sunny land, but not grown to excessive sugar levels, so it's succulent and structured, but not terse. The vines are not young, 30-45 year old , from a vineyard in mica schist at an impressive elevation of 500-600 meters. The grapes themselves? 30% Rabigato, 20% Codega, 15% Gouveio, 10% Viosinho. Rabigato is perhaps the crown jewel of Duoro whites, while Gouveio is the most famous, in its more renowned alias, Godello.
Duoro, Xisto Cru, 2017
This is one of the best Portugues reds I've ever tasted, certainly the most elegant, its supple fruit hinting at flowers and earth at the fringes. It's very moreish even now, but very balanced for aging and gains in texture, details and length as it opens up. Like the Indie, it comes from high-altitude, schist vineyards, but unlike the Indie, not from a single-vineyard - Cru doesn't mean vineyard in Portuguse, but rather "raw". Hmmm, cru, crude... It doesn't feel raw or crude, unless Seabra meant the wine doesn't feel manipulated, which is true, it doesn't. I love it, mostly for its vibrant tension and energy.
Luis Seabra