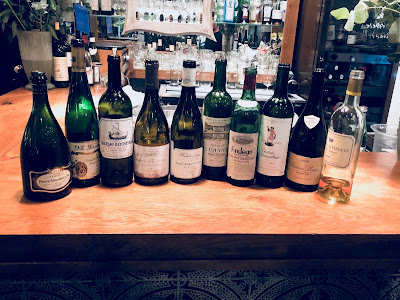 Another birthday party. I don't have any grand observations about life. The only things I learned this year, thanks to COVID19, is that even afternoon naps can become a bore and that I'm more anti-social, and at the same time more in need of company, than I'd thought.
No grand theme to the evening, either, just great friends and a wine I'd been cellaring for over a decade. Other than that, business as usual. Which means, in our case, Champagne, Burgundy and Bordeaux.
Pierre Gimonnet, Special Club , 2000
The nose is very lovely, sauteed mushrooms hinting at an umami savoriness that the palate delivers. 2000 is a year a lot of houses declared, but I bet they wished the millennium turned in 2002. This is still lovely and fresh despite the mediocre vintage, but its structure is already unraveling.
Domaine Hubert Lamy, Saint-Aubin Premier Cru, Les Frionnes, 2010
This bottle is slight below par for Lamy, the palate less racy and convincing than even his Saint-Aubin village wine, and that really isn’t right for a 2010.
Domain Arlaud, Morey-Saint-Denis Premier Cru, Les Blanchards, 2012
I always associate Morey with iron and forest floor, and this is what exactly what I get here, an aristocratic country don shrouding its silky core with rusty tannin. It's an interesting contrast with the more forward and comfortable Bonnes Mares, which comes from the Chambolle-Musigny side of the vineyard.
Domaine de la Vougeraie, Bonnes Mares Grand Cru, 2005
Detailed and deep in a communicative style, but very good. The fruit is balanced, showing a delicious, mature sweetness. You may argue the style is on the modern side, but it's not overdone and the quality of the fruit, and its depth, is grand indeed.
On to Bordeaux. 2000 was the year in which wine-making technology in Bordeaux had advanced to the point where very few, if any, decent-plus estates would ever make a really mediocre wine again. Couple that with a vintage that turned out glorious and just about every house outperformed its norm.
Château La Louvière, Pessac-Leognan, 2000
A balanced wine, showing black fruit and earth with a touch of iron. I'm not that big of an expert on Pessac, but I always think it's more about graphite and earth than earth and iron.
Château d’Armaillhac, Pauillac, 5me Cru, 2000
More extracted and forward, with more stuffing, iron and muscle, very Pauillac.
Château Beychevelle, Saint-Julien 4me Cru, 2000
For some reason, I never got to drink a Beychevelle until this year and now here is the second one since January. Very elegant. Savory. Complex.
Château de Fargues, Sauternes, 1980
The sweetness has receded to the background, and so has any depth it might have ever had. The nose isn’t very deep or complex, but still has the magic of robust maturity, with the botrytis kick just a side-note.
I almost forgot, because I didn't take notes: Willi Schaefer, Mosel, Graacher Himmelreich, Riesling Kabinett, 2018. The reason I didn't take notes is because it was such a thrillingly delicious wine, that I drank it too quickly to pay attention to details. With a grower/winemaker of Schaefer's caliber, I usually take notes of depth and structure, but this time, my senses were swept away.
Chateau Beychevelle Château de Fargues Château La Louvière Domaine Arlaud Domaine de la Vougeraie Domaine Hubert Lamy Pierre Gimonnet Willi Schaefer