July 17, 2020
Albariño, Alvarinho - a trendy grape going by two different names, hailing from (at least) two different homelands. The common denominator is a suggestion of lime and tonic on an oyster shell.
Alvarinho is the name the grape goes by in Vinho Verde, Portugal's famous "green wine" DOC. At the lower end of the quality and price range, it makes for thirst-drenching quaffers that admirably punch above their weight. When you start going upscale, with a producer like Anselmo Mendes, arguably the region's best producer, even the basic quaffers have surprising balance and purity. A wine at the top level, Anselmo Mendes, Vinho Verde, Alvarinho, Expressões, 2017, has the nuanced aromas, pungent punch and detailed, mineral texture of a Chablis Premier Cru, albeit in a different style. More like a Muscadet de Sèvre-et-Maine, really. 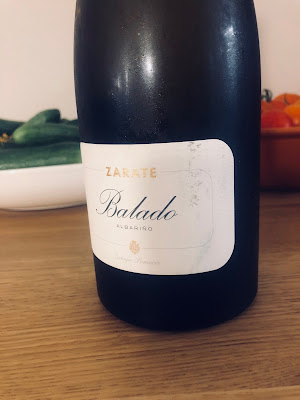 Mendes' peer in Spain is Rias Baixes' Zarate, whose top wines are made of 70 and 150 year old Albariño vines. Case in point, the Zarate, Balado, 2016, the lesser of the two flagship wines (this is the cuvée made of 70 year old vines) is as deep and detailed as a Chablis Grand Cru. This is just the wine to offer people who mock descriptors like river stone, marine salt, sea weed. Nothing convinces like living proof.
Zarate