June 22, 2020
I love Syrah. I think I wrote once that it's my second favorite red grape. That really is saying something. Syrah and Pinot Noir are the only two red grapes I feel attached to.
I love Syrah. But not enough to keep notes on all eighteen wines we drank at Itay Gleitman's "Syrah Around The World" tasting, sixteen of them blind, and most in flights of twos. Not when Habasta was serving up oh-so-distracting goose sausages. 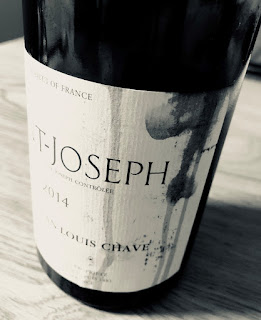 Domaine Jean-Louis Chave, Saint Joseph, 2014
This was a gorgeous wine two years ago. It's even better now after a little bottle age has brought the plump fruit and acidity into better balance and focus, within a loose structure that keeps an integrated tannic frame around the goings on. The nose is very expressive, with classic notes of black pepper and flowers, with almost feral suggestions of bacon.
Penfold’s, Bin 28, Kalimna, 2017
Served alongside the Chave as a contrast for contrast's sake, it's not interesting nor tasty enough to compete with the Chave. How should I put it? Let's say I was at a free winery tasting. The fruit is sweet and sappy and the spicy finish is just good enough that I'd buy a bottle to be polite.
Thalevin-Graillot, Syrocco, 2016
I'd heard about Alain Graillot's Moroccean side-project. When Lifshitz started importing it, I noticed but never bothered to consider buying a bottle. Turns out it was harder to enjoy than its flight partner, a Mexican wine full of VA whose name I didn't even bother to write down.
René Rostaing, Côte-Rôtie, Amphodium, 2017
Don't walk away, René. This is a wine that pulls in opposing directions. The nose is fresh and vibrant, a classic young Côte-Rôtie festooned in black pepper and blood. This same freshness is belied by the rough tannins. Enjoyable, for all that, because Rostaing nearly always bottles magic.
And now for my favorite flight of the night, a pair from two island lands in the southern hemisphere. This is the kind of flights I go to tastings for.
Te Whare Ra, Marlborough , Syrah, SV5182, 2016
This is a single vineyard bottling, the SV5182 is the name of the plot - SV, get it? It's peppery, complex and lithe, like a middleweight trained for speed.
Meadowbank, Tasmania, 2018
Now this is the kind of magic I can't really articulate or explain. It's a fragrant, floral Syrah, and plays as though the grape was reduced to just violets and geraniums, but it plays that single chord so deftly, it creates worlds of expression. But no one seemed to get that but me.
d’Arenberg, Dead Arm, 2016
I used to have a few d'Arenbergs when I started out, among them a couple of Dead Arms. I haven't drunk a Dead Arm in a decade and I didn't think I'd ever miss it, except this did make my New World bashing heart blanch. It's tannic, but these tannins are focused, high quality tannins that highlight the peppery character of the wine, as well as balance its trademark liquorish tendencies.
Kingston Family Vineyards, Bayo Oscuro, Casablanca Valley, Chile, 2015
Lewinsohn, Garage de Papa, Rouge, 2018
On to another interesting flight. It was an interesting pairing of two floral wines that sprung from two very different climates. The Chilean comes from a very cold micro-climate in an cold area known for whites in the first place. It's an especially pretty wine, heavy on geraniums. The Garage, on the other hand, places its floral component in the background and herbal/spicy notes in the foreground. One of my favorite things about Lewinsohn's reds is how manages to play those green herbal notes while not showing any anorexic signs of an early harvest.
Powerline Vineyard, Walla Walla, the Beautiful, 2016
Guigal, Saint Joseph, Lieu Dit, 2016
I would call this flight the "If You Really Loved Me You'd Finish These Bottles With Me" flight. Sorry, hun, gotta run! These blue ribbon high scorers* both start out sweet, but while the Beautiful manages to break ahead and escape the honey trap, the Lieu Dit surrenders to the abyss.
* I've seen the scores for both, and having drunk the wines, all I can say is that these are the kind of inexplicable scores that get college professors fired.
Isole Olena, Syrah, 2015
I'll stop here. It's a wine that deserves to be the final act, if only because it will stop you in your tracks. It's tannic, yet savory, with a terrific combination of black pepper and smoke on the nose. We guessed Thierry Allemand and so would you.
d'Arenberg Domain Faury Guigal Isole Solena J. L. Chave Kingston Family Vineyards Lewinsohn Meadowbank Penfold's Powerline Vineyard Rene Rostaing Te Whare Ra Thalevin-Graillot