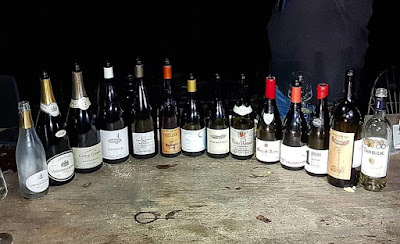 Until/unless COVID9 strikes again, we've let our social guard down and celebrated the return to normalcy in a sunset picnic in the Shoresh vineyard. For a change, I couldn't keep up with all the wines. These are just the ones that slam dunked right in my interest and comfort zones. The rest would require a quieter setting for a deeper setting. Also, a couple were not up to my expectations.
One wine that over-reached any expectations was the Chateau de Reignac, Bordeaux Superieur, 2001 (magnum). It's a relatively recent creation. Yves and Stephanie Vatelot acquired the estate, on the western side of the Entre Deux Mers appellation, in 1990 and six years later dug up a lake to combat frost. You'd think "interventionism!" except that the entire region of Bordeaux is the product of Dutch drainage work centuries ago. You can't get more interventionist than that. I don't have that much experience with those AOCs that are situated between the two Banks, but they always struck me as caught halfway between the vertical lift of the Cabernet grapes of the Left and the plump roundness of the Right's Merlot. And this is no exception. It is a much more impressive specimen than any I'd encountered before. 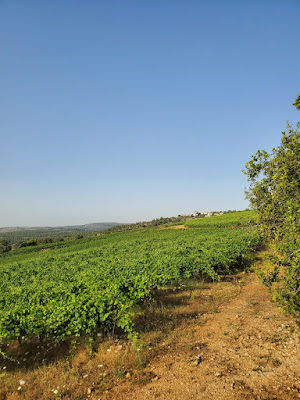 The other wines that attracted me were basically the usual suspects.
Tzora, Shoresh Blanc, 2019
I'm obviously a fan of Tzora and I've been drinking the Shoresh for years. So my saying the 2019 is extra special is high praise indeed. As always, it hits a sweet spot between the kind of smoke and flint you'd expect in the Loire and the fresh tropical fruit of New Zealand, so it's true to its baseline character and doesn't break new ground. I think the difference this year is that it's even more vibrant and focused than usual.
Larmandier-Bernier, Terre de Vertus Premier Cru, 1996 (magnum)
The nose announces its maturity with notes of caramelized apples and apple cider. Every trace of the bristling chalky notes of the Vertus terroir are long gone, and while the great length and acidity are impressive indeed, I think it’s past the stage where it reflects the true majesty of Vertus.
Gaston Chiquet, Dizy, Blancs d'Ay, Brut, Grand Cru, n.v. (magnum)
This, on the other hand, does reflect its terroir, which is actually an unusual terroir: a Chardonnay plot in Ay, a Pinot town. It's a wine that froths with oranges and chalk, but these two elements combine to produce a difference effect than in the Côte des Blancs.
Finally, a pair of village wines proved what a lovely vintage 2016 was in the Côte d'Or. They also reflect the personalities of the villages. The Domaine Fourrier, Morey-St-Denis, "Clos Solon", Vieilles Vignes brooding and complex, cloaked with minerals, the Hudellot-Noellat, Vosne-Romanee sexy and loose, teasing with the village's archetypal spices.
Chateau de Reignac Domaine Fourrier Hudelot-Noellot Larmandier-Bernier Tzora