May 18, 2020
"I never thought I'd need so many people" - David Bowie wrote that in 1972, in the song "Five Years". And it rang true these past months of social distancing and isolation. So man, it was truly a cathartic experience to hook up with my wine buddies for a memorable birthday dinner that would have ticked off many items in any wine lover's bucket list: a great grower Champagne, a vertical tasting of venerable Chateau Trotanoy (a Top Five Pomerol estate by just about any reckoning) and finally his, a Leoville-Les-Cases in almost peak, drinkable maturity. 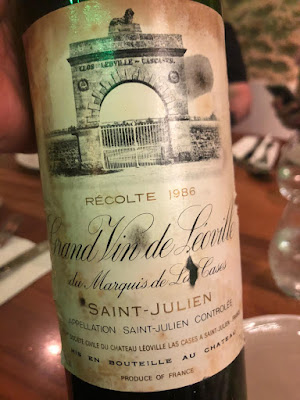 Pierre Péters, Grand Cru Le Mesnil, Les Chetillons, 2011
Third time for me with the 2011. Not a great year, but a great wine nonetheless: fresh, chalky, still slightly yeasty, ripe enough so that its character is more oranges than apples. It starts out detailed and nuanced and develops even more complexity with air.
Chateau Leoville-Les-Cases, Saint-Julien 2me Cru, 1986
The classic , quintessential "never ready" claret finally meets me at an sweet spot of maturity. Iron on the nose, savory tannins balanced the mellow sweetness of mature fruit.
Chateau Trotanoy, Pomerol, 2006
Then came the vertical. The book about Merlot is fruitcake, but as depicted in the classic estates of Pomerol, that can be a rather tannic fruitcake. In 2006, though, it was a ripe, full, round fruitcake on the palate, although the nose is much more complex than that.
2008
2008 was one of the better deals of the first decade of our century - well, almost anything from 2000 is by definition a great buy and 2001 was rather undervalued, coming as it did on the heels of 2000, but after that you had to wait for 2008, which had enough faults to drive expectations and prices down, yet they were not the kind of faults to drive the purists away. Let's put it this way, with winemaking technology being what it is, if you ignore the weather reports and just look at the final outcome, it's a vintage that would have been hailed a classic in the 70's, it just wasn't viewed that way in the 21st century, and that served to offset what the East Asian market did to prices in Bordeaux. Anyway, from what I've been tasting of them recently, the 08's are at the stage where the fruit is dominant but has emerged from from primary youth - yet still hasn't picked up the savory complexity of a mature claret. Having said all that, I'd been drinking mostly Left Banks and the Trotanoy '08 is more advanced, a lovely, savory wine, whose fruit is very discrete and balances its round fruit with a modicum of tannins.
2005
I always get the feeling that 2005 in the classic French regions is sort of considered an American vintage -  an excellent one, but more suited to the US palate and market. But as the wines are going into the second half of their second decade, I'm starting to doubt that opinion. I don't even know how many wine writers are still left who were able to judge 2005 in its youth against the benchmarks of comparable vintages of the past. Whatever, this shows the best balance so far, being at the sweet spot where it's showing subtly depth and complexity that still require concentration to grasp. At the same time, it's evolved enough to display the black fruit and iron I remembered from encounters with mature Trotanoys. Simpy a classic, and an outstanding one.
2009
Another vintage that is being heralded as an "American" one, I suppose. Based on what the Trotanoy shows tonight, it deserves it. It's as complex as the 2005, but its low acidity makes it a tougher drink. The black fruit shows less of the "fruitcake" character.
2010
This is tougher than the 2009, but that's because it comes off as more tannic, and not because of low acidity. The tannic structure is balanced enough to make the wine rewarding and it's a very interesting wine, still only at the start of its life, even 10 year after the harvest.
The ballot results are in: 05, then 10, 08 are tied for second place and finally the 09, despite very obvious stylistic differences, is tied with the 06 for third.
Chateau Trotanoy Leoville-Les-Cases Pierre Péters