The Old World is where my wine heart thrives, but I've tasted enough Californian wines in the last four years to admit that, if I were to relocate to the San Francisco Bay Area, I'd make a road trip to the Sonoma Valley once a month.

I had a free day the Sunday before RSA Conference 2020. I wasn't planning a trip, because I was scheduled to land at 6 AM, but my friend Ram Menashe had other plans for us. He had landed the day before, rented a car and promised to drive. All I had to do was find wineries for us to visit.

It wasn't as easy as I'd thought. My first choices either did not have tasting rooms or were not open on Sundays.  At the end, we wound up discovering two new, excellent-to-great wineries and one depressingly mediocre.

It was a great day. The Russian River Valley part of Sonoma is charming and beautiful and it's still much less touristy than Napa. 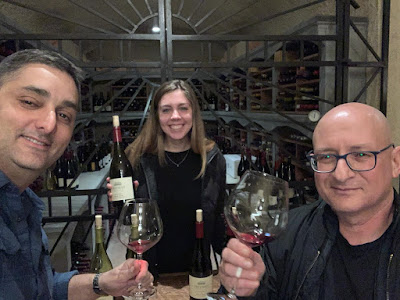 This is, to me, an indisputably great winery, the wines showing vivid brightness and expressive, sexy joy across the entire lineup that we tasted (we did not get to taste the flagship Aikido Pinot Noir). I fell in love within minutes. A perusal of the winery's site shows that some of the wines are sourced from vineyards that are owned and managed by the winery, some are bought grapes. It seems to make little difference to the outcome. It's well worth reading through the site, the background story is quite charming,

Ryo-Fu, Chardonnay, 2017
Ryo-Fu is Japanese for "cool breeze", the wine so named for the breezes that cool the Russian River Valley vineyards that this wine is sourced from. It's stylistically similar to the Hawk Hill, with a few telling points. It's more tense, and also more savory and saline. If you love Chardonnays, you’ll fall in love with it.

KR Ranch, Pinot Noir, 2016
Gloria Estate, 2017
Yu-Ki Estate, 2017
All three vineyard-designated wines display the sexy side of Pinot: wild fruit and exotic spices. The Yu-Ki is arguably the best, certainly the the most savory, flirting and exotic - but you really can't go wrong with any of the three.

In contrast with Freeman, the wines are less immediately expressive, at least, the reds are. There’s something very old world about their restraint. The basic character of the Pinots is different than the obvious Burgundy benchmark - lace and cherries rather than silk and strawberries - but just as deep, projecting potential in 5-10 years to come.

Merry Edwards was one of the first female winemakers in the US, way back in the early 70’s. The winery is based in the Russian River Valley and makes RVR and Sonoma Coast Pinot Noirs, a Sauvignon Blanc, a Chardonnay and a sparkling wine.

Let me encapsulate, inasmuch as I fear I may be doing Merry an injustice by telescoping the achievements of a long career. She gets Pinot and the way she gets it shows an aspect I didn’t expect would appeal to me. So thanks for taking me a few steps outside of my Pinot comfort zone. I only tasted one still Chardonnay and one sparkling wine, so I’m taking a big leap generalizing from that. But it seems to she recognizes what makes the Cote de Beaune whites and Champagnes so appealing and brings that to the RVR fruit without forcing the fruit into becoming what it was not meant to be.

Russian River Valley, Olivet Lane, Chardonnay, 2016
A lovely wine, whose infusion of flint made me think of Chassagne. It's fermented in steel and aged in oak, but the oak has been integrated in a totally seamless fashion.

Meredith Estate, 2017
This was the "It Girl" of the tasting, deep and earthy with subtle fragrances of truffles. The other Pinots all had something to recommend them. Klopp Ranch, 2017 was also earthy and mushroomy, but not quite as impressive and fine. Olivet Lane, 2017 was distinctly more fine than the Klopp Ranch, the most fragile and floral of the lot. Coopersmith, 2017 was just as deep as the Meredith, but without the complexity, its potential less convincing.

Sauvignon Blanc, 2018
Apparently, Edwards doesn't like grassy notes in Sauvignon, so she stirs the lees a lot to make the wine creamier. Despite that, it retains a nervy edge.

Cuvée Olivet, 2012
The estates's sparkler is quite lovely, albeit not very complex. It avoids both sweetness and yeastiness.

I was here last year. Didn’t enjoy much of anything I tasted except for the Trenton Pinot Noir, which I loved. It's the classic wine that made their reputation and unless something's changed since I was last here, it's the wine to buy.

We didn’t taste it this time. Which drove home a sad point.

There’s not much to write home about besides the Trenton. Joseph Swan is a sort of a Marie Provst waiting for the dachshunds' feeding time.

Grenache Blanc, Catie’s Corner, 2017
A one trick pony, but that trick is nice: white fruit with a nutty spice.

Grenache Blanc, Orange Wine, 2017
Same vineyard, grapes fermented on their skins. The result shows loss of varietal character, or any character at all, in favor of a metallic surface.

Chardonnay, Cuvée de Trois, 2016
Too rich for me, just apple cider with a limp backbone.

Valdoguie, 2018
The grape Valdoguie was formerly known as Napa Gamay. Under any name, it's best forgotten.

Pinot Noir, Saralee’s, 2016
The is the cold cucumber soup version of Pinot.

Pinot Noir, DNA, 2016
Cucumber soup with a dash of paprika.