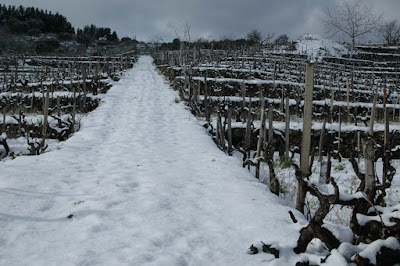 I generally like Etna, the Sicilian DOC in the volcanic soils of Mount Etna. But to my tastes, Terre Nere leads the pack by a distance. I don't know whether it's due to terroir, the age of the vines or winemaking, but the wines show an intriguing and balanced mixture of fruit and savory elements, resulting in an earthy, truffle like character, reminiscent of Piedmont. More on that comparison later. Eldad Levy has been importing them for 10 years. I had attended the first tasting he hosted for his clientele and, while I haven't purchased every vintage he's brought in, I taste and drink Terre Nere whenever I can. That's why I had no intention of missing this rather rare vertical tasting of the portfolio.

So what did we have at the tasting? An intriguingly fine rosé, a white trio that shook me of any preconceptions I may have had about this lesser known style, Premier Crus that punch above their weight and Grand Crus truly worthy of their name*. In all, wines I’d love to buy, age and drink. Even if I can’t afford the entire range.

* It should be noted that the Etna DOC doesn't recognize a vineyard hierarchy of Premier and Grand Crus. Terre Nere use their own classifications, which have no legal standing, although they do bear out.

Eldad says there’s been a recent shift towards gentler winemaking, less extraction. Having drunk various wines over the years, admittedly on the young side, it strikes me that the terroir is still the biggest factor at play.

The bottom line is Etna is still just a DOC but Terre Nere deserves to be a DOCG.

Very lightly colored with delicate aromas and flavors of strawberries and a hint of dry earth. As is the case with all the red wines, the main player is the Nerello Mascalese grape. The grapes used are older than used in the basic red, 20-60 years old. It's a very food friendly rose, with a lot of aromatic interest and good grip despite its delicacy.

A field blend of various local whites mostly Carricante, offering a light backdrop of fruit and minerals. Its delicacy would make for an interesting comparison with the Rosato rather than with its white peers. It's just the basic white, but its breed, delicacy and mineral complexity would match a Puligny. I wasn’t crazy about the whites when Elad started importing ten years ago, but this is a rude awakening as to what I’d missed.

A Premier Cru comprised of 100% Carricante. It's more assertive and riper than the basic Bianco, with hints of sweetness. It’s hard not be influenced by how Terre Nere labels the wines, but it is indeed a lesser Cru than the next wine in the lineup, albeit a fine one in its own right.

Also 100% Carricante. The winery classifies the Calderara Sortana a Grand Cru. It’s not over the top in any way, but the fruit is more pronounced, to the point I can almost discern specific fruit for a change - apples I think. The finish is forceful and elegant at the same time. It’s intriguing to experience how it opens to display the mineral character that the regular had, but at a higher volume, all the while showing great refinement. Deserves to be aged a few years.

Mostly Nerello Mascalese, from all the house’s holdings, vine age ranging from 6 to 50 years. It's fruity on a backdrop of earth and spices, with integrated tannins that are just firm enough to provide a backbone without blocking the flavors. The fruit and secondary flavors need 10 minutes at least to achieve equilibrium. It's a great teaser for the house style and a good food wine, but the real joyride was yet to come.

At this level, the first red that the winery classifies as Premier Cru, the vines are 50+ years old. Tasted alongside the 2010, both show a lot of iron on the nose, but the 2017’s fruit aromas and flavors are still primary. Like the basic Rosso, it needs time for the fruit toi settle and the components to find equilibrium. Both vintages are lithe, yet chewy, hearty and in need of meat.

Bottle age has brought out even more iron and notes of tar. The tannins are tasty, but still prominent. A chewy, tough wine, tougher than the other Crus even after a good period in bottle, but lovely and detailed for all that and makes me wish I'd been more patient with my older stocks.

The vineyard's soil is richer, making for a different style and I can more easily discern fruit, red and black cherries. Pundits like to call Etna the Barolo of the south, which I don't think is entirely accurate. I get it, because of the savory, earthy, tarry character, but I never saw it that much in Etna wines I've tasted and not even in all of  theTerre Nere wines. When I do find signs of that, the wines remind me more of Barbaresco. This is the first wine where that character is in display, which is why I prefer it over the Feudi di Mezzo, even the 2010.

Now this might actually be the Barolo of the south, for the way it mixes the iron Of the Feudi di Mezzo with the tar and truffle infused earth of the Santo Spirito. Lovely.

This was served alongside the Guardiola for a really educational comparative tasting and showed a similar character, but also little things that make a big difference: a little more ripeness and a touch of flowers, more baby fat on the palate. It was definitely overshadowed at first by the Guardiola, not because the Guardiola is necessarily a better wine, or even a flashier one, just more self assured and precise. Just as I was writing that down, the Maganazzi opened to show a savory note of truffles, even though the Guardiola still had the more focused form.

At this point, having gone through the Premier Crus, I'd definitely recommend this part of the range as one of the best value for money I know.

Now on to the Grand Crus.

On the nose I get another dimension, although I can’t quite pin it on specific aromas. Maybe a touch of sweetness that doesn’t overwhelm but sort of suggests extra fuel for the trip. Grand Crus should be deeper, bigger, more complex and/or more elegant than lesser vineyards. This is unarguably deeper and bigger, without loss of refinement. Here as well I get notes of truffle, which I always love. There’s certainly enough stuffing here for a long promising future.

Another Grand Cru. This is the first wine that made me go wow when I sniffed it. I can't really say why, it's not that different from the San Lorenzo, but I got a smoky note and extra vividness and vitality that thrilled me.

The ultimate Terre Nere Grand Cru, from a plot of Calderara Sottana dating before the phylloxera hit. Even after three hours in decanter, the first whiff is monolithic. Then it starts to show the same truffle character as the other Grand Crus, while suggesting there is much more in reserve. We didn't taste the Grand Crus side by side, so my perceptions aren't scientific, but even though the Don Peppino was tauter than the other Grand Crus, it didn't come off as any less elegant, if anything, it was arguably even more refined.

I think there's a fairly common pattern in the last 40-50 years, of an exceptional producer uplifting the quality and image of a wine region and carrying his peers in his wake. Terre Nere happens to be a particularly good example of this pattern.