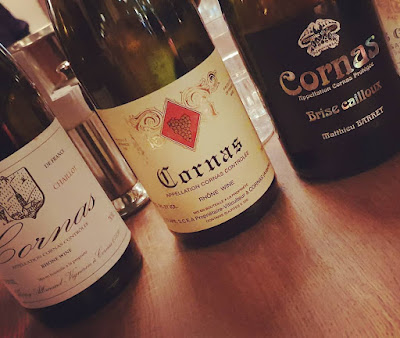 It wasn't originally conceived as such, but our monthly get-together turned out to be the ultimate, classic Cornas showdown.

A fantastic, well delineated nose, the kind where the descriptors would not carry across its awesomeness, but do convey its typicality (black pepper and bacon, which is what you'd usually look for in the Northern Rhone). The palate is smooth and elegant, sadly not quite  yielding the wildness of Syrah at its best, silky without being too sweet, its tannins becoming grippier with air.

More than any other Cornas I've ever drunk, Allemand is the ultimate expression of Cornas the wildebeest, and as such, art of the purest form. It wins the battle hands down, more complex and slithering than contender Clape, sterner and more convincingly fluent in the language of wine and the cadence of the phrases and notes it plays, expressing itself with chords of iron and pepper. One of the best wines of the year, and it's actually only Allemand's second wine.

But, first, before the main even, we had a few preliminary matters to attend to.

I really hope this is not a typical bottle, because I loved the 2011 version of this wine, where the house crafted magic out of a challenging vintage - whereas 2012 has already gained a reputation of a great vintage. The nose initially strikes me as too yeasty, but once it gets a few minutes of air, it's quite lovely with a charming layer of chalk. The palate, though, never gains any depth or complexity.

This is quite a classic Cote Rotie with savory black fruit, bacon and black pepper. I'm not saying this is a great wine, but it is the kind of mature, classical wine that makes you appreciate a good cellar. And the nose is fantastic.

This is Coulet's basic Cornas and it's always an excellent cuvee that deserves a lengthier excursion. With just a single glass to examine, I get flowers, hints of bacon and smoke on a sweet baby just starting tom shed its fat.

Chapoutier's upscale Saint Joseph cuvee that I'd always wanted to try but never quite got around to. It shows as a young and ripe wine - but nonetheless worthy of its reputation - with notes of black pepper, bacon and iron.