November 29, 2019
I got back from Piedmont with a deep craving for those most royal of Italian wines, and their lesser entourage. Half a dozen Nebbiolos later, each with its own distinct personality, and I sort of managed to scratch that itch, but not quite. 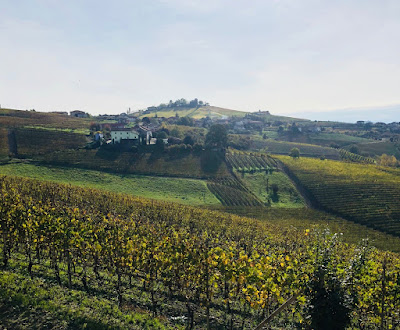 This shows better than it did at the small family owned winery from the fringes of Piedmont, which stands to reason - you never know how long a bottle had been open on a given day, and I've never particularly trusted various methods of handling open bottles. The palate, while certainly not a generic food pairing/palate cleanser, gives away its backwater origins, due to its lean frame, but that frame carries fresh fruit and the typical spicy acids and rusty tannins combo. The nose is even better, tarred cherries on a dusty road. (Nov. 3, 2019)


From a single vineyard just north of Alba, this leans towards the cool, floral side of the grape, black cherries with intense notes of tar that slowly add earthy tints, but none of the savory elements you'd get in the great vineyards to the south. The tannins are smooth without being tame, but one reason I don't find the savory, spicy finish I look for is that they provide a bitter counterpoint to the cool fruit, rather than a rusty, grainy one. (Nov. 16, 2019)

This is sold by Wine Route for about 150 NIS.

This is sourced from young vines from all of the estates vineyards in Barolo, aged mostly in tanks, and it shows. Naturally, it's lighter and fruitier than a Barolo, but the quality is quite eminent. The tannins are very focused, elegant yet dusty, while the aromas show iron, earth as well flora and truffles at various stages of development -almost a junior version of Barolo, with a character of its own. (Nov. 19, 2019)

Like the Vajra, this is a declassified Barolo, with a subtle difference: the criteria for the declassification is purely qualitative and not based on the age of the vines. Any grapes not good enough for Cavallotto's quite renowned Barolos end up here. In either case, you start out with lesser grapes, but here these would include grape from old vines, and that's a telling character trait. Regardless, the end result is markedly different, because the styles of the houses are different to begin with, and this is aged in Slovenian foudres, just like a Barolo, albeit for a shorter period. The end result is quite a traditional Barolo, with a bouquet of cherries, tar and dust; its tannins puckering but not massive, the fruit austere and lithe, cherries with gracious acidity. Damn fine in its own right, the best of everything I drank tagged "Nebbiolo" this month. (Nov. 22, 2019)

Now, on to the big boys.

What I started to learn in Piedmont is that the great Nebbiolos start to dance, for me, not when the tannins and acidity start to soften, but when their aromas and flavors abound with an earthy savoriness that recalls truffles. Ronchi's version of their namesake cru, matured in mostly used barriques, is just a tad too round in the mouth to best reflect its lovely aromas. But, if it's a sort of a rich wine, it never overplays or overstays its richness. In the end, it still comes off as traditional and that nose really is quite lovely. (Nov. 4, 2019).

This costs 20 plus euros at the winery and about 40 USD at K and L Wines.

This, like the Ronchi, has a nuanced bouquet dominated by earth and truffles, with a touch of iron. The palate is leaner and more austere than the Ronchi, the tannins rustier and more old school. My personal favorite of the three Barbarescos. And it costs only 15 euros in the supermarkets in Piedmont! (Nov. 10, 2019)

Still backward, this is obviously not a wine smoothed and softened by barriques. The nose is initially dusty and spicy, with time and concentration, it shows hints of flowers, earth and truffles. The palate has plenty of tannins, but despite that feels the roundest of these three. A bargain cru bottling (15 euros), but far from being an exceptional one. (Nov. 12, 2019)

I opened this on the early side, because I remembered the 2011 drank quite well at a similar age. Posters on Cellar Tracker think it's a sin to open it this early and, while I agree I'll have to hunt down another bottle, it is already quite expressive in a gruff, grungy way, with loads of iron covering its dark fruit and rusty/dusty tannins. It's even more expressive with air, when it hints at truffle-inflected exoticism. Thrilling. (Nov. 17, 2019)