Gaillot makes a set of Crozes that are on the same playing field as the class of Hermitage, Cote Rotie and Cornas. The best Graillot I’ve had yet, the 2011 starts out deceptively soft at first, with the velvety texture of Cote Rotie and builds up both complexity and power as it evolves into a firmer muscularity a la Hermitage, with only an unresolved rusticity on the finish revealing its origins in the lowly appellation. The quilt work  of raspberries, violets, pepper, olives and bacon is both charming and text-book Northern Rhone. (Aug. 23, 2019) 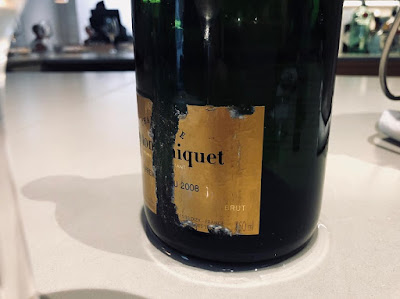 I sometimes like the Or a bit more than Chiquet’s Special Club. It’s not necessarily better, but if ever a Chablis Grand Cru made you swoon with its bone dry punch and its tapestry of minerals, imagine another layer or dimension, a little funky and brothy, that is the contribution of the Pinot Noir. (Aug. 9, 2019)

The color is deep bronze, which worried at first - and I don't drink enough aged triple star Ausleses to know what to expect. But the few tasting notes on Cellar Tracker mention its deep golden color so I guess it's to be expected. Anyway it's still lively and flavorsome, and the color wouldn't be out of place in its peers in the dessert wine niche: Sauternes, Tokays, whatnot. The flavors run deep and treacly but the huge weight of the sweet fruit and the spicy punch that the botrytis lends are redeemed by the delineation and length provided by its marvelous acidity provides. The weight seems to dissolve with air and the wine unfolds more nuances, that would surely be lost if more than two shared the half bottle. (Aug. 9, 2019)

Wine Route lists this as 130 NIS but has been selling this on discount from the start: 70 NIS at the annual Grand Sale and then the remnants for 90. It would’ve been a great  value even at 130, a well made claret that is still young, with grainy, drying tannins, with a character I would peg as minerals rather than earth. Unlike mediocre young Bordeaux, the hints of oak subside instead of growing more prominent. The price is misleading, and, like any good Bordeaux, it requires more time in the cellar, at least three-five years. (Aug. 2, 2019)

An unusual blend of Carignan, Petite Sirah, Syrah, Petit Verdot and Colombard (a white grape!), this is Vitkin's flagship wine, that they really don't release every year - no lip service there. It's rich and very complex, but with enough acidity to ensure an elegance that Vitkin's reds don't always show. Whatever their other qualities - and I'm a big fan - elegant is not the first word that comes to my mind. The nose shows the iron and graphite typical of the Vitkin Petite Sirah and the suggestion of meat and spices typical of their Carignan. I think I spot some black pepper from the Syrah, but that's as far as I get breaking down the gestalt. At 300 NIS, I'm not sure it justifies the price, but it does justify its reputation and whatever hype it may already have generated. And 300 NIS has become the gold standard for Israeli flagship wines. (Aug. 16, 2019)

Another addition to the Wine Route portfolio, this is a small  grower (they make only 1800 bottles of the basic Bourgogne, more or less the same number for their Premier and Grand crus) with very good reputation and scores. It's sourced from two parcels around Fixin. This is earthy and austere with soft tannins and a very saline finish and while air lends it a muscular litheness I really enjoy, it's patently a Bourgogne-level wine, nothing more and nothing less, not an overachiever or a declassified village wine. (Aug. 17, 2019)