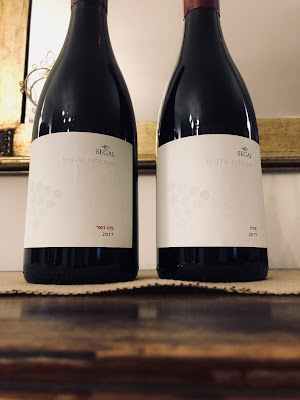 Ido Lewinsohn has been heading the Barkan/Segal winemaking team for about two years, and now a batch of interesting wines made during his's tenure is seeing the light of day.

Look, the big change that Wine Spectator, Wine Advocate and all those British wine television shows brought to the world of wine is they made wine a household beverage. And after that, it was only a matter of time before it became susceptible to trends. The latest is drinkability. Which is a good trend. Wines that lure you with moreish vivacity while not necessarily forfeiting depth and complexity.

The interesting thing about the three series Segal has released is that each approaches the concept of drinkability with different techniques. Because I'm lazy - and you probably are, too - there's a short overview of the techniques at the bottom. All are lithe, vital, fun wines, a fun that comes from aesthetic intent, not merely a sensual one. When I got pulled in this wonderful world, seventeen years ago, no one made wines like this in Israel. You can argue comparative quality, but, at least among their red peers, I struggle to think of many wines that match the freshness here.

And they're all decently priced for the quality.

The first two are reds made in the whole cluster fermentation technique. Each comes from a different vineyard in the Jerusalem Hills.

No, Burgundy does not equal Pinot (or Chardonnay), but its spirit is a notion that sensitive winemaking, taking advantage of grapes with the transparency and delicacy to reflect the place of origin, can capture that elusive idea, terroir. Which is something that the Segal team has done quite well here. It has the same autumnal, vegetative decay thing Pinot does so well in Burgundy going on around the fringes, yet that is just salad dressing to a combination of black cherries and shades of cranberries and chocolate that with any luck will prove to be a local Pinot signature. The quality and style are an almost shocking surprise. I never expected such lithe freshness in an Israeli Pinot Noir. It's not very complex, I admit, but I'm a fan of deceptively simple Pinots that go for purity, vibrancy and sheer pleasure.

Another way to approach the concept of terroir is to say that the good vineyards foster the best expression of a grape variety (and I'll skip over the paradox that there is more than one way to best express a great grape variety). I don't claim that the hills of Jerusalem have vineyards the likes of those found in Cote-Rotie, Hermitage or Cornas (or the Alexander River, for that matter), but this is a good example of Crozes-Hermitage level Syrah: floral, balanced, comfortable level of fruit and tannins, some black pepper. Shorter and fatter than the Pinot, and a step or two behind it.

The prices are just fine. The Whole Cluster is priced at about 100 NIS, I believe.

Next are two wines fermented with the wild yeasts that are always present on the grapes themselves. They're priced at about 60 NIS.

I admit I can absolutely not discern the contribution of the wild yeasts here. Whatever, this is a nice young Chardonnay, showing the floral and citrus side of the grape. Not a phase of Chardonnay I'm too crazy about, which is why I rarely drink Chardonnay this young. But Ido - and teams working under his direction - has a good track record working with Chardonnay, and this shares the same purity and clarity of his more prestigious Garage de Papa Blanc. Judging by the development after a couple of hours (more aromas of flint, a broadening of the attack, more punch on the spicy finish), I would expect it to bloom after a couple of years in the fridge.

It sometimes seems like everyone in Israel, including Ido in his Recanati days and in his own boutique winery, favors the Rhone and Southern French varieties over the Bordeaux grapes. How ironic is it, then, that he coaxed so much drinkability and liveliness out of a grape I hardly ever enjoy much in its youth. The Cabernet traits are well presented, currants with a touch of pungent leafiness. Solid length and a lot of interest for the money.

Finally, the Free Run series, explanation at the bottom. These are also priced at about 60 NIS.

Describing this wine won't carry across the impression of how it's akin to, yet at the same different from, the Wild Fermentation sibling. It's floral and citrusy, too, yet there's a green herbal tint that would make me guess Sauvignon Blanc and it leans toward rainwater rather than flint. For me, it works better young than the Wild Fermentation, but both are wines I'd drink for the immediate pleasure they offer.

More immediate than the Wild Fermentation Cabernet, shorter too, with tart, earthy fruits. This isn't Merlot The Fruitcake. And it isn't Merlot masquerading as Cabernet Sauvignon, either. Cabernet Franc, maybe.

1. Whole cluster fermentation refers to the fermentation of intact clusters of grapes as they are picked from the vine with no intervention of machines leaving all berries and stems (the part of the stem which holds the grapes is called the rachis) intact.
2. Fermentation, by either wild or industrial yeasts, has become synonymous with the battle between all that is natural, and the convenience and consistency of man-made machination. ... Wine is a product of fermentation, the process by which yeasts turn sugar into alcohol in order to yield energy.
3. "Free Run” is the terminology used to describe the juice that flows freely from freshly picked grapes before they are pressed. When the bunches of grapes are stacked up on top of each other, the sheer weight of all the the fruit results in the release of some liquid.