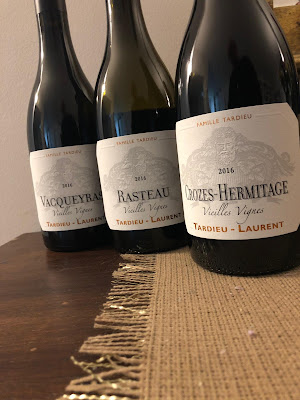 Wine Route used to import Tardieu-Laurent about fifteen years ago and then stopped, for undisclosed business reasons. Tardieu-Laurent are not a house that on the face of it would appeal to the likes of me, to be honest. They are negociants who buy finished wine from small producers across the Rhone Valley and the Languedoc and then age them, in barrels selected by Michel Tardieu, in the firm's cellars. They do engage a consultant to oversee the work at the vignerons they partner with, but basically, their business is finding good partners and establishing long term relationships with them. And choosing the barrels.

Having said that, I used to like them quite a lot, despite all these reservations. So I was really curious when supply was re-established by the good folks at Wine Route this winter. The prices are decent. Wine Route are pushing them in various discount configurations, so they should cost around 150 NIS.

I don't have straightforward conclusions about the wines I tasted. They didn't turn out to be easy wines for me to taste or enjoy. They're well made, the oak is unobtrusive, they're not too modern and they reflect a sense of place. I liked the, but... They're much too young, even (especially) the Crozes, and I don't feel they've particularly enriched or enlivened my life.

Like almost every red from the Southern Rhone, this is a Grenache-Mourvedre-Syrah blend. I tuned out on the Southern Rhone about seven years ago, not so much because of an anti-GSM bias so much as what was done with the blend in the marquee appellations like Châteauneuf-du-Pape Basically, everything just got bigger: more alcohol; broader, sweeter tannins; more fruit extract without exactly a greater sensation of fruitiness (I think that if the wines had gotten fruitier, I might have liked them more). The only thing that didn't get bigger was the acidity. Robert Parker appreciated the sweeping increase in scale and his scores that the market also also got bigger.

The Rasteau plays out like a mini-Châteauneuf, especially the 15% ABV, with black fruit, graphite and herbs. It's redeemed by rusty tannins and a finish comprised of iron, espresso and earth. It's big, alright, but it's serious enough to require some concentration. And the oak is in no way over-done or blatant. (Jan. 11, 2019)

I had a thing for Vacqueyras, back in the day, mostly because I feel hard for the 2001 version of this wine in a South Rhone tasting in 2004. And, as my original love for the South Rhone petered out, it seems to me that somewhere in the back of my mind, I was sort of hoping for the right Vacqueyras to come along. I'm not sure this, with it's 15% ABV, is the right Vacqueyras for me, but it does go a way towards explaining why I liked the 2001 so much in the first place. Like the Rasteau, this is a showcase for espresso and mineral nuances. Both nose and palate are more detailed and refined than the Rasteau, evidence the garrigue stamp of the South and reward introspection. (Feb. 8, 2019)

For me, the Northern Rhone is where the game is actually played. This is a wine of breadth rather than depth, showing the plump, chewy side of the Syrah grape. It starts out attractively, with unobtrusive oak and enough facets of blackberry fruit, violets, bacon and a strand of earth to make for decent complexity. After an hour, it shuts down and the finish, which is not very refined to begin with, becomes more tannic and green, attenuating the fruit. Days after the bottle was gone, I still couldn't make up my mind how much I liked it. (Jan. 13, 2019)