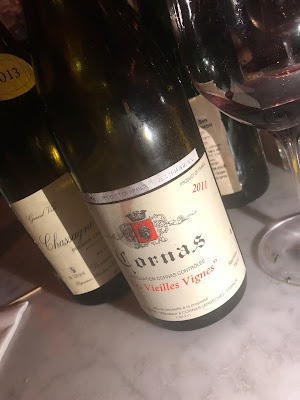 A night where no wine was technically faulty, a couple were great, a few were underwhelming, and overall the selection and drinking order did not always make sense. On par for this group.

A relic from the start of the century when ripeness was king. The winery's site states that "Seavey is known for handcrafting wines of exceptional depth, elegance and restraint". Because of that restraint, the alcohol weighs in at a lowly 15.3% ABV. At best, a Cali Cab as ironic performance art.

Tropical fruit with an overlay of white pepper, an awkward, almost flat, structure, awkward interplay of flavors. A disappointing bottle from a great producer's flagship vineyard.

My first bottle from this famous producer. The nose is excellent with decent complexity (Vosne always smells great, at virtually any vintage and quality level):spices, black pepper, forest leaves, black toned fruit. Long and rustic with a gap in the mid palate. Just about what I’d expect from this vintage, an approachable, pretty wine without any profundity.

This is a Chassagne red I always enjoy drinking. Fresh, young and floral, with a playful, almost ethereal elegance (especially for a Chassagne red). Needs air to show complexity.

2011 was consistently unprofound throughout France, it seems, yet this is a tremendous overachiever, still on the young side, a Cornas just about to transition from youth to the early stages of somber maturity.  Complete and very tasty, it shows the judiciously ripe black fruit, molten rock, violets and black pepper typical of the North Rhône. Very full and ripe with lithe tannins buried in the  depths. I don’t really regret opening it now but it obviously has years of aging potential.

Oddero usually shows the rugged rust of old school Nebbiolo, but not in 2012, apparently, at least now now. The tar and smoke on the nose are lovely, but the sweet fruit, while in no way overripe, is too fat for classic Piedmont. Not a wine I'd refuse to drink, and I wouldn't suggest that aging won't strip the fat away to show a more classic build, but if you open it now, you might not recognize the house style.

One of the new wave of varietal reds that Gaby Sadan has released recently, this is a ripe style of Syrah, without being luscious enough to enjoy the ripeness on its own terms. The ripe fruit pulls the wine one way, the bitter tannins in another. And that's a problem.
Alain Voge Domaine Blain-Gagnard Domaine Sylvain Cathiard Leo Alzinger Oddero Seavey Shvo