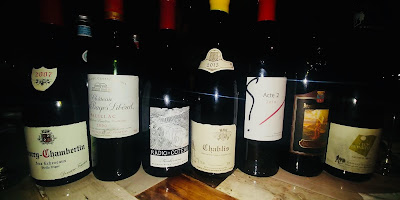 The history of Chablis in a nutshell is that it was perceived for decades as an outlier of the Cote d'Or, the source of a very marketable brand (due to an easily pronounced and remembered name) for the negociants, the identity of the actual Chablis producers and afterthought at best. Until foreign importers discovered producers like Raveneau - and the rest is history. Except history is never limited to just one chapter and the current chapter is the one where the competition has caught up with Raveneau. I would be able to tell you exactly how far they've caught with him if I could still afford Raveneau, or if I could even get an allocation, but going over old notes and memories, I'm pretty sure that Droin and Henri, at least, are on equal footing, at times arguably even better. Henri certainly makes a village Chablis that punches above its weight, unlike the Raveneau 2012 Chablis, for example. The 2015 is even weaker, because it was hard to make classic Chablis in 2015. This is not as lean and linear as I'd expect from Chablis, with hints of tropical fruit.

At one point during dinner, someone asked, which famous person in the history of wine would you have liked to be? And I immediately said Kermit Lynch, because living on the West Coast, travelling all over Europe from the 70's and onwards and discovering new wine regions seems like a golden life. Well, Lynch carries Germain and based on Lynch's track record, this has to have been a bad bottle or a bad vintage. A bad something, anyway, annoyingly bad, one dimensional and oxidized, unbalanced, starting ouu ripe and finishing sour and thin.

Sylvie Guinaudeau and Jacques Guinaudeau own the legendary Chateau Lafleur in Pomerol. They also own Chateau Grand Village in Fronsac, which as far as I can figure out is where the Acte 2 comes from. The debut vintage was 2009 and labelled Acte 1 and the number is updated with every vintage. You can guess what the 2010 was named. This is not very complex but so balanced and tuned that it its placidness is redeemed by its craftsmanship.

This isn't a very dramatic wine, but, probably due to the great vintage, it is very balanced and poised, the elegant grit of Pauillac married to the elegant finesse of Saint Julien,

Blue fruit, bacon, a freshness that belies its fucking 15.2% abv. The alcohol becomes tiring, eventually, yet the wine's depth and complexity are undeniable.

My group is prejudiced against Tuscany. Although some of us, and I won't name names, will make an exception for Tuscan reds made of Bordeaux grapes. Thus, this was served blind to see what we would make of it. I liked it, it didn't knock me out, but I had it pegged as a good, rustic blend of Bordeaux and local grapes I couldn't quite identify (obviously, I was wrong).

The kind of wine that makes for a successful night, it has the vitality and initial oomph of a Grand Cru, albeit without any of the complexity, just Gevrey sauvage and that sense of completeness that elevates a wine. The acidity, that feels like biting into a freshly picked apple, doesn’t hurt. And neither does the forest floor.

Hugh Johnson calls this a benchmark Aszu, and he should know. This is complex and multilayered on both nose and palate, the botrytis providing a whirlpool of flavors lifted by ample acidity.