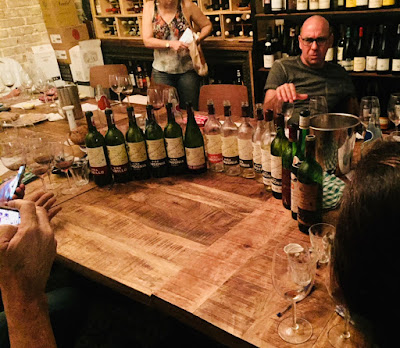 Lopez de Heredia is an is an uncommon Rioja property. Most Rioja wineries don't mention vineyard names on their labels. It's just not part of the wine culture. Heredia is one of the venerable household names that not only has three separate brands demarcated by vineyard of origin, but its top vineyard, Tondonia, has become so synonymous with Heredia that many think it’s actually the name of the winery.

Heredia is very much a classic Rioja bodega. Almost to an extreme. Very traditional, low tech winemaking techniques, a winery full of mildew and fungus, very long barrel aging. They make Gran Reservas only in grand years, which sadly is not always the norm in Rioja.

Cubillo is a vineyard that makes only Crianza, as though Bosconia and Tondonia are too precious to waste on the workhorse wines that most people drink. This shows savory, relatively simple red fruit and vanilla, soft tannins, juicy acidity. Very classic in form and character, after some airing it shows hints of smoked meat.

This is more mature on the nose, naturally, even evocative, with notes of balsamic vinegar. The palate is not much more evolved, it even feels youthfully sweet. Most of the wines were opened just before being poured, per the winery's recommendation. Given the large number of bottles tasted, we did not have enough time to give the wines enough time to develop in glass.

The Reservas are aged long enough to be considered Gran Reservas by Rioja law.

I'm uncomfortable making judgement on this. I got light TCA immediately, and while I may be wrong on a lot things, I always get TCA. I've drank the 2001 in the past, so I know it's good and the proof is that even the TCA couldn't obscure the lovely crushed fruit and mellow, mature complexity.

2002 is considered such a bad vintage that for the past six years I've seen the same bottle of Artadi Pison 2002 up for sale at 50% discount at the Tel Aviv Wine Route branch with no buyers. Nonetheless, this is very good and shows exactly the mellow complexity I expect from a mature Reserva.

Because the TCA issue, this turned out to be the best of the lot, the aromatics the most elegant and complete. Like all the Reservas, It is still on the fat and sweet side. I’d let my bottle rest another 5-10 years. Having said that, it was a hedonistic delight with the jamon.

The winery rightfully claims this is Burgundian in style, hence the bottle shape. I prefer it to the Tondonias, at this point at least, the body being a little leaner, the aromatics more in the direction of cooked vegetables and balsamic vinegar.

Nail polish remover and barely alive on the palate. I drank the same wine five years ago and enjoyed the experience, but even though it was released around 2010, I don't think even the winery meant for it to be drunk this old.

The white wine flight was my favorite. Rioja whites are not my immediate choice, but these I enjoyed a ;ot.

An oxidized, herbal style. If you accept the style, and I do, it’s really a lovely, expressive wine.

This is a very appealing contrast. It's less oxidized, which allows the minerals to take center stage and tones down the sweetness of the fruit.

The best of all worlds. A fresher style, despite the age, with fine focus. Just a hint of oxygen, but mostly about minerals.

Harnessed wildness and a great wealth of mineral aromas and intensity of lime and saline flavors. This is my third bottle. The second was just nice, but the first time, and now this, are truly, unquestionably unique experiences. An Iberian Corton-Charlemagne.

And the reds have arrived. This is regal and fresh in the nose, focused on the palate, tannins, acidity and fruit well balanced, with no fat.

After the three decade mark, there are no great wines, only great bottles. For the final flight, Eldad brought out two bottles from bodegas I don’t think exist anymore. Along with a bottle from Tondonia, these were relics from a bygone age, harvested around the time of A Hard Day's Night and released after the Beatles broke up.

The nose would not appeal to everyone, with the fruit deep in the outfield and showing iron, rust, sea water. Alive in the palate, with savory sweetness, fruit married with brine, tannins still there. Not very complex, the enjoyment is derived from how aged has transformed the fruit.

Maderized, but still alive - although the Grand Condal has survived the havoc of Time much better. I don't really have a lot to say about it.

Teetering on the brink of death, initially there are nice notes of cigar box, but lacks oomph and conviction. And then the oxygen takes over.

Wine Of The Night and it knows it, with the tempered savoriness of virile middle age. A better show than a bottle two years ago, which proves my point about this being a game of great bottles and not great wines.
R. Lopez de Heredia