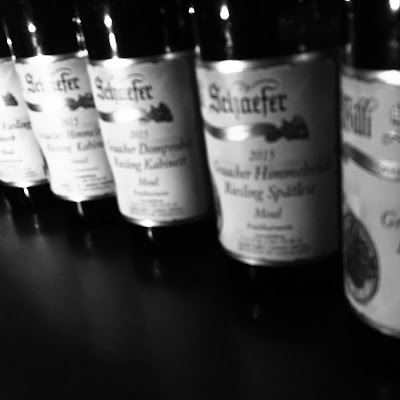 I'm working on the annual Summer Of Riesling post. Something I wrote there could well serve as an introduction here.

Even if all the Mosel produced was kabinetts, it would still be one of the greatest wine regions of the world. Here is some corroborative evidence.

Exhibit A are ten wines from the great 2015 vintage, grown and crafted by a domain and winemaking team which are universally recognized as one of the greatest on the short stretch of the river that is the home to Germany's most renowned vineyards.

This shows how much you can make of the simplest things, in this case, the apples and minerals that the quintessence of Mosel. And it's actually not quite that simple, as its balance of sweetness and saltiness is very sophisticated.

Even taking into account the preconceptions of the vintages I came with, it's hard to deny 2015's greater class.The 2014 is naturally more advanced, with even a slight touch of petrol. The 2015 is fruitier, cooler, racier, more precise and, ultimately, better tasting. Both are sweeter than the trocken, without loss of racy edge.

You could call the feinherb and the trocken the village wines. If you're looking for more parallels to Burgundy, that would make the kabinetts village lieux-dits, perhaps, the spatleses Premier Crus and the ausleses Grand Crus. I don't like that parallel very much, because the different pradikats should serve as guidelines for sugar levels and ripeness, and not necessarily quality. In other words, a matter of style. However, the comparison is handy in a way, because ausleses taste grander, due to the bigger body. Having said all that, the kabinetts are a step up in quality, compared to the feinherbs, and that is more obvious with the Himmelreich, which is more open than the Domprobst. It is a touch more tropical and fuller, with a ripeness that is almost hedonistic, although it is, of course, well balanced by the acidity. Minerals come out in time, mostly on the nose. The Domprobst is racier, very mineral laden. It's more interesting than the Himmelreich, because the sweetness is better balanced by the minerals right from the start.

Both very closed and mute, although the Domprobst's minerality makes it more expressive now.  Having said that, the difference between the two are less pronounced than on the kabinett level. But even here the Domprobst wins.

Another reason the Burgundy parallel is useful is that as you go up the pradikat hierarchy, the wines need more time to come around. This, for example, is a glacier years from thawing. Yet even now, it manages to walk a precipitous tightrope between great, ripe concentration and thrilling, mineral-laden focus.

Moving on to a trio tasted from half bottles.

Schaefer produces two-three different auslese batches from the Domprobst vineyard alone. Number 14 is the richer, more concentrated and backward version. It's also more expensive. You'll notice I'm not going into very specific details and listings of aromas and flavors. The specifics are not that important. If you drink any of these three now, or wait a few years and drink them, you're going to experience a canopy of aromas and flavors - age will just add nuances - and really, all you need to know is you will get remarkable concentration along with great complexity. The Domprobst is likely going to be serene and mineral laden, whereas the Himmelreich has the same tropical exoticism I found in the kabinett, with a hint of pungent minerals and spices. It's lighter than the Domprobst, and then so is the Sonnenuhr, which I think is the raciest and most elegant of all three and sports a touch of lemons. Despite the differences, all are cloaked with fruit and honey. Due to terroir and craft, all are almost equally balanced and fine tuned.