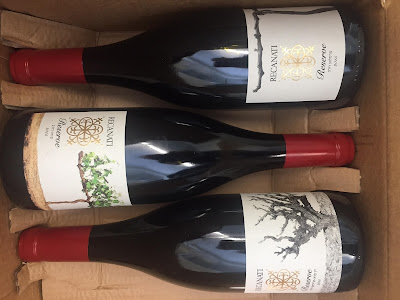 If local interest in wine writing extended beyond reviews, gossip and marketing promotions, I'd be interested in doing a story on the Recanati  Mediterranean series, Now, Mediterranean wines is a term I don't like much, but it will do as a shorthand for lithe, yet robust, wines suited to the local climate, based on grapes that can reach phenolic ripeness in Israel at palatable sugar levels.

How much did the borth of the series have to do with the inclinations the people involved (for what it's worth, the winemakers and management people that I personally know share the same tastes as me) and how much of it was a business decision to carve out a new identity and find a marketable niche? Does anyone besides me even care that much how a winery shifts its profile and its product line?

In Recanati's case, these questions are so interesting because the decisions the winery took have made them the most interesting outfit of its size in Israel - broadly speaking, if you want to drink interesting Israeli wines, there's a short list of boutique wineries and then an ever shorter list of medium sized outfits, like Recanati and Vitkin. The changes in the last decade extend even to the packaging; hell, I'd even say the labels of the Reserve series are among the top five best or so in Israel. *

* In case you're curious, in no special order: Recanati Reserve, Feldstein, Tzora.

So that's the buildup to my notes about the so called 'Mediterranean' Reserve series as well as the Special Reserves, that I bought pre-release in the Recanati summer event.

Here's what Wikipedia has to say about it: "Marselan was bred by French ampelographer Paul Truel in 1961 at the Institut National de la Recherche Agronomique (INRA) as part of a collaboration with the École nationale supérieure agronomique de Montpellier (ENSAM) to produce high yielding varieties with large berries of moderate quality. As Marselan could only produce small berries, the vine variety was shelved and considered not likely to be commercially released. But viticulture trends in the late 20th century that begun to value lower yielding varieties with good disease resistance to hazards like powdery mildew encouraged the INRA to revisit Marselan. The vine was submitted for approval for commercial release and was entered in the official register of grape varieties in 1990."

The history of wine making in the late 20th century in a nutshell.

Recanati makes a user and food friendly wine out of it, with fair complexity and  greater character and interest. With its black fruit trimmed with back pepper, herbs and dusty earth, it comes off as a Crozes-Hermitage transplanted to Vacqueyras. There's a warm, ripe breadth to it, but without the cheap ripeness that can be so off-putting with local Cabernets. (Mar. 4, 2017)

Calling Syrah a Mediterranean grape stretches the credibility of the concept, but I'm willing to concede it's a grape that can be suitable to to Israel, even if hasn't turned out to be the dominant force that ten years ago many expected it to become. The Recanati version went through a couple of production and marketing schemes before it was wedded to Viognier in a nod and a wink to Cote Rotie a few years ago. I loved the first couple of vintages, but the pair have since been divorced. The current vintage shows the succulent, peppery aspect of the grape. It's riper and less stellar than the version that Recanati winemaker Kobi Arviv makes. But then, that Syrah is one of the best ever made in Israel and is a testament to the skills of the Recanati winemakers and their employers' recruiting acumen. As for the wine under discussion, initially, the bitter tannins turned me off, but a very pretty purity of expressive fruit came out after a couple of hours. Wait and see, with optimism. (Mar. 5, 2017)

But I'll tell you what, though. Recanati's renaissance starts with, and hinges on, one wine, made from a grape that is as good a candidate as any to be our national grape.

This is always a deep wine that reveals its aromas and flavors reluctantly in its first couple of years, the 2015 especially so. What I get here at first is mostly a sense of warmth and a spicy/tannic mouthfeel. Then it finally offers up surprising aromatic complexity - not surprising for being complex, but rather because the aromas offer a gentle elegance I'd not found in previous vintages. Really, the Wild Carignan should live up to its name, but the 2015 defuses its punch with mellow blue fruits and wisps of black pepper. Wisps that become muscular strands as the wine shows its wild heart. (Mar. 16, 2017)

The Reserves are priced at 130-150 NIS (your mileage may vary) and you get a lot of quality fruit for the price. The price is in line with the price of many wineries' flagship wines and what you don't get for that price, thankfully, is histrionic helpings of oak.

The actual flagship wines, the Special Reserves, do cost more, of course.

This is a Rousanne/Marsanne blend, and I surprised myself for fancying this white Rhone combo at the launch. I guess these grapes do like the local landscape. There's not a huge level of acidity, but there is enough to support this rather fat, fleshy wine and the gently spicy punch on the finish. The spices also embellish the nose, which also features some chalk. Taste this alongside other local whites and it will show well; it probably won't finish first, but the results won't embarrass the people who made it and you'll be satisfied with the price (about 150 NIS). (Mar. 17, 2017)

When Recanati started, and for a good part of the previous decade, this was your typical Israeli blend, Cabernet Sauvignon with some Merlot. Then along came Ido Lewinsohn, first, and then Gil Shatzberg, who replaced Lewis Pasco as main winemaker, and finally Koby Arviv - and little by little the blend changed. I noticed the change with the 2008 SR and wrote about it and then a wonderful thing happened. Some interchanges on an old wine forum led to a Recanati tasting event and I met Ido and that started a long, random chain of events that ended up with the group of friends I currently taste with.

Recently, it's been a blend of Bordeaux and Mediterranean grapes, according to the winery's site. I'd guess that means Cabernet, Merlot, Syrah, Petit Sirah and Carignan, in various permutations. This is a wine where you actually notice the oak. It's well handled, and the winemaking and barrels are both equally top notch, but it's there for now. Its aromatic and flavor profile reminds me of what Ido and Kobi do in their own boutique wineries: the freshness of the fruit, a welcome helping of black pepper, even a light streak of green. With that, I do sense a greater emphasis on sheen and gloss; which is not necessarily a bad thing and I'm not detracting the quality of the wine. Obviously the target audience is different from that of a boutique winery's, even if there is some overlap. The SR needs to acknowledge a great proportion of unhip buyers and naturally the team needs to be less adventurous, consciously or not. I'm trying to describe the effect, not criticize it. The quality of the wine would place it in the local top ten and you should buy it (for 200 NIS or whatever the release price is), if you haven't already, and then cellar it for at least three years (Mar. 18, 2017)

I want to close with off with an offhand note about a wine that we've been drinking casually at home for a while, the Jonathan, White, 2016. I'm not sure whether it replaces the old Yasmin series or cohabits the shelves, but this Chardonnay/French Colombard blend shows that quality control at the winery goes down all the way to the lower rungs. It's a light, fruity blend that won't blow you away but is very useful when you need to entertain a lot of friends and want to be able to enjoy yourself as well. This is where democracy wins.
Recanati