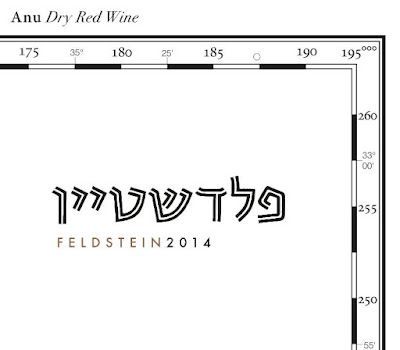 This is mostly Carignan, with touches of Grenache and Cabernet Sauvignon, but initially, what I get is a resemblance to new World Pinot Noir, with fresh red fruit on the nose. Not something I picked up at the launch. At the launch, Avi discussed the steps he took to capture the grape's meaty aspects, but at this stage, it shows a rather floral character. Even when those meaty traits do show up, they are delicate and suggestive, shadowed by similarly delicate herbal tones. In short, this is likely the most feminine Israeli Carignan yet, not to mention one of the best, with finely tuned tannins. (Dec. 2, 2016)

This is a new venture by Sam Harrop, a New Zealand Master Of Wine. The self promotion on his site is a little heavy handed, but the results here are very good, even excellent. The black fruit is lithe and clean, focused without being over technical, conjuring what I love about the North Rhone without being a copy cat. So pepper and bacon adorn the black fruit and the structure is almost Burgundian, but without the brawny iron of the east bank AOCs or the nervy edge of the west. (Dec. 6, 2016)

The usual cool elegance that is the trademark of the Nahe trio (Donnhoff, Emrich-Schonleber, Schafer-Frolich). Complex aromatics of minerals and herbs, apples and peaches, with a lithe, succulent body that is hardly the quasi Auslese that you sometimes get in recent years, what with global warming and all. Despite the length, it doesn't pack a wallop or complexity of flavors - I keep waiting for a stinging jab that never comes, but this is limp and tepid for a Riesling of this pedigree. (Dec. 11, 2016)

Mosel Kabinetts don't last long in my fridge. I can't keep my hands off, really. But Wine Route wasn't able to unload all their stocks and I found another bottle at one of their branches. This is still vibrantly nubile and fresh, all granny apples and slate, with some aromatic complexity slowly blooming and coming into its own, so that I also get a hint of pastries and kerosene. (Dec. 12, 2016)

This is in a rather chunky place right now, hinting at possible complexity, but for now only offering simple, homely pleasures: aromas red fruit adorned by lead pencil, hints of brett like dew drops on grass - all echoed on the palate, which shows a rough, rustic poise. I want to like it more - I opened an bottle I bought in the States to share with friends a year or two before Wine Route first started imported Baudry, so I feel a foolish, vain possessiveness about the domaine - but to be honest, I've drunk better Lore reds. (Dec. 18, 2016)

I always advocate the virtues of low alcohol wines, but when I read that the latest vintage from Nitzan Swersky's micro-boutique weighs in at 11.5% ABV, I was worried it was too much of a good thing and that the fruit might be too green and anorexic. Especially since it's a varietal Chardonnay this year, not a grape I'd expect to see at 11.5%. Well, the 2015 Ahat is green, in a floral, green soybean sort of way, and it won't load a lot of flavors on your taste buds, but those flavors will be virtuously savory and rocky/salty - think Muscadet with lesser lees contact. Meanwhile the nose is a charming trompe l'oeil of rain water, apple peels and flint. an almost ephemeral mist of aromas and scents. The well defined acidity, bracing with a twist of lime, makes it a very gastronomic wine. (Dec. 19, 2016)

120 NIS, which is on the expensive side. If you buy it, and I urge you to get a bottle, don't buy it to partake of obvious greatness, buy it to hop along for the ride - wherever Nitzan's muse will take her, I'm sure she'll agree this is just a piece of the final puzzle, and you and I will enjoy figuring it out with her.

It's been over a decade since I last bought a Flam. I probably stopped buying at the same time I stopped buying Israeli wines, period, and then when I resumed flirting with the local wines, I guess I was looking elsewhere. For me, the 2000 Flam Reserves signaled the start of the modern wave of local boutique wineries, even though Castel, Margalit and Tzora were around for about a decade at that point. When I returned to the fold, what interested me were wineries that were searching for a different type of identity - more suitable grape varieties and fresher, more elegant wines - and Flam just didn't grab me. I have to say, this wine doesn't look likely to hook me. Aromatically, very nice: black pepper, fresh black fruit. Palate, also nice, lithe with good acidity. So, what's wrong? Nothing, really, but there's just no sense of excitement. At the same price range, Mia Luce races ahead with ease, making this feel like a pale also-ran, while Kishor offers the same quality, with more personality, at less than half the price. (Dec. 24, 2016)

This is similarly styled, but livelier - the fruit is arguably a little sweeter but with a touch more energy, the nose more characterful and layered. I can't put my finger on any specific thing or things that are better here, or more mundane with the Flam. In the end, personality just goes a long way, personality that shows in little details and nuances that keep unfolding with air, at the end exhibiting both an exuberant side - in the succulent fruit that is just a little candied, while retaining hints of black pepper and meat - and a serious, somber aspect, as well. (Dec. 27, 2016)

I can't really put my heart into actively not liking a German Riesling of any sort, but I usually think the trocken (dry) versions miss the point, which is how much charm and joy a little sugar adds to the classic style. But Willi Schaefer makes a great version, where the racy acidity plays the same role as does the sugar in the off-dry version of the Mosel idiom, that is, it anchors the granny apple flavors in a sensual, exuberant vivacity. The quality of the fruit is noticeable in the detailed complexity of the aromas and belies the easy price. (Dec. 25, 2016)

Nice, but, although the pungent, nutty aromas are very pleasing, this a bit too soft and lightweight for me, and doesn't gain more presence over subsequent days.

Ido Lewinsohn manage to coax the same flinty/nutty aromas out of his Chardonnay that we love so much in Bourgognes, as well as a similarly tasty saline aftertaste. That's the obvious point that everyone picks up on and writes about. In 2015, the oak is even subtler and more precise than in the past, or maybe the vintage conditions were better, allowing the sweetness and flesh of the fruit to better assimilate it. I think his red is the real killer - but, even if he only made this white wine, he'd still be one of the nest winemakers in Israel. (Dec. 29, 2016)

Slow to open, this shows depth belied by its austerity, as well as minerality and a herbals streak that is a cross between tobacco and garrigue. (Dec. 30, 2016)

13 Euros in the Loire. Seems like a decent value, although I have no idea who Cognard-Taluau are - this was a whim purchase on a family vacation in a well stocked store that didn't seem like a tourist trap.

Athalia said…
I really enjoyed reading this post, big fan. Keep up the good work and please tell me when can you publish more articles or where can I read more on the subject?