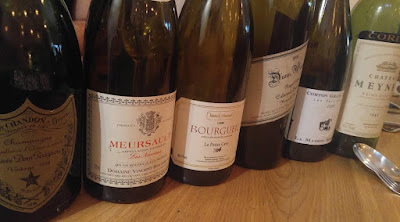 Eventually, modern medicine was able to find a cure for our addiction, but until then, we partied with precise and alarming regularity.

This was a totally dysfunctional bottle, but I feel duty bound to report. An ullage the size of the Grand Canyon, the color of a dead rat and aromas and flavors of a savory manzanilla.

Did the denizens of Meursault come up with the concept of the village lieux-dits because the lack of a Meursault Grand Cru necessitated a new marketing approach? I'm just wondering. Anyway, Narvaux is a fairly well known vineyard. This is only my second or third sample and if I were to generalize from such a small sample, the wines are rather limey and flinty/marine in a Puligny style, with an nervy edge. That would be my tasting note here, although I'll add that this does end up somewhat fat and generic on the finish.

This is a Grand Cru that floats by on its complexity, long and rusty, with exotic spices and iron. It's very true to the style of 2008 from my experience, with the acidity upfront, and will need more time to fill up its lithe frame.

Black fruit, barnyard, decent length and complexity, but not much more. Nice, but seriously, it's amazing that you can actually find any of these: anyone that bought this and aged it for this long was a fool, there was absolutely no upside in cellaring this past the late 90's.

This displays a less common manifestation of Brett, according to Ido. Interesting to learn the foulness has multiple aspects and that winemakers can actually tell the difference. Thankfully, it's less prominent here than in the Meyney, and overall, this is tasty, just not a star.

Finally, a brett free claret, which is appropriate, as Amirault makes the cleanest Loire reds I've tasted. I'm sure some will find fault with that and label him a modernist, but here's what I think: start off with clean flavors and a balanced wine and then let time in the cellar do the rest. That's what his forbears would have done if they could have afforded cleaner facilities. This is way too young, even at ten years of age, but the vivid fruit makes this a great little gem, with a hint of spices providing interest even now. This is costs much less than 200 NIS and will age as long as a Bordeaux costing twice the price, say twenty years - in fact, it will need those decades in order to provide significant enjoyment.