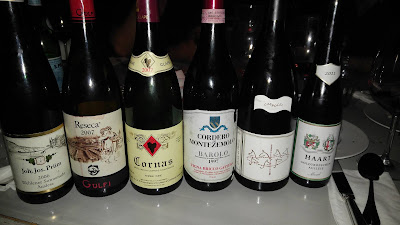 Going to a restaurant is one of my keenest pleasures. Meeting someplace with old and new friends, ordering wine, eating food, surrounded by strangers, I think is the core of what it means to live a civilised life.

There's substantial, botrytis inflected fruit, tasty and deep, and a complex nose highlighting all the gifts of mature Riesling: a hint of petrol and that ephemeral juggling act of fruit and minerals. For all that, though, this is not the great wine you'd expect from Prüm and the vineyard - whether this is an off bottle or the vintage, this lacks acidity and vibrancy.

This Sicilian producer was unknown to all, except for Ido who brought the bottle. Even with the recent emergence of new star Etna producers, such as Terre Nere, Benanti et al, you still can't accept as a given that the initial vintages were as well made as the more recent ones that directed the spotlight towards the region - nor that they matured finely. With that in mind, this is very good, concentrated yet with fine balance, the spicy red fruit reminiscent of Pessac with that sense of burnt rock, but sweeter, with a thicker body.

I don't have a great deal of experience with Clape, really, I know he's one of the Rhone greats, but the few bottles I've had have moved me less than newcomer Paris or even Crozes stalwart Graillot. Not for lack of quality - you can't argue this is a well made, delicious bottle of Syrah, full with black fruit and pepper, a touch of olives and a slight band aid funk adding interest and nuances. But there's a roundness, a seamlessness, that's too flattering and middle of the road for my tastes. Even the light brett can't counteract that excessive politesse.

I'm not familiar with the producer, but this is excellent with the typical tar and spices. Despite the warm vintage, this is still fresh and the tannins savory rather than sweet. Very complex and long.

I'm a fan of Castro, but I have to admit I sometimes find the top flight wines less charming than the mid-tier (although I loved the Tounot), but I have chalked it up to youth and figures this flagship wine would show better after eight years. There is good fruit underneath the oak and the overall effect is very monolithic and big, as though designed to impress rather than highlight the personality of Touriga Nacional.

Haart is in no way the household name that Prüm is, yet this does shine much brighter. It's likely even sweeter, yet shows fresher with better acidity and purity of fruit. Whatever edge the Prüm might have aromatically is just a matter of age, not inherent quality, and the Haart will surely catch up in a few years.
Alvaro Castro Auguste Clape Cordero dI Montezemolo. Gulfi J.J. Prum Reinhold Haart