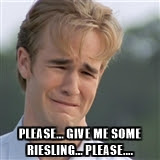 An outstanding wine, at the start of its maturity, that lives up to all my expectations. Long, dry without in any way being overwhelming, crisp and saline. Simply awesome minerality on the nose, and then spicy yellow apples, grapefruit and lemon zest. (Apr. 18, 2016)

I've told you about this before, so just go ahead and buy some. Nothing in Israel even came this close to the German mold. The acidity is low compared to the Teutonic prototype, even if it is excellent in local terms, but the nose - the nose has that steely character of green apples, with salty nuances that make their way to the palate as well. (May 4, 2016)

While still in the flush of youth, this already shows confident complexity within its gossamer structure, its aromas and flavors of granny apples and pastries coming across pastel like, with a hint of mint and an even vaguer hint of tropical fruit. If real apples were this exquisite, we'd all be vegetarians. (May 5, 2015)

More of the same, with, naturally, more pronounced sweetness, a deeper veneer of slate, and so sexy it hurts. (May 9, 2016)

This is at the point where the intense sweetness and fruit are starting to recede, their memory being replaced by nuanced aromas of minerals and petrol (that gain presence and power with air), only to have the fruit reappear on the finish as red apples and sweet grapefruit. This is great, although not in the way the Sistine Chapel is great, more in the way sunsets are great. (Jun. 4, 2016)

Giaconda, 180 NIS when I bought it long ago, 200 NIS now (presumably a storage charge while the importer was looking for buyers?)

I've been drinking this for over four years, and in the flush of youth it was perched exquisitely mid-way between a crystalline expression of green apples and icy slate and the quintessential spicy baked apples so typical of Austrian Rieslings. Now the balance has shifted towards the baked apples. As a matter of personal taste, I prefer the earlier incarnation. It was just as deep and complex four years ago so cellaring my six pack didn't really so much for it, except prolonging the drinking experience, which in itself was a good thing. (Jun. 11, 2016)

I'm lucky in that I enjoy German Rieslings almost equally in all stages of their development. Surely the complexity and depth are there from the start, and so are the flowers and.or minerals (depending on the terroir) and age merely provides additional complexity, breadth and the taint of maturity. But there's a sweet spot, about 8-9 years after the harvest for spätleses, where the intensity of youth is balanced by a certain sauteed herbaceousness, and where the real magic begins, right there where Riesling starts speaking in tongues. That's what we have here, a nose evoking cool, aloof elegance, which I think is the due to minty aromas. There's a bit of dill and parsley in the background. As for form - an almost feathery body belies the tense backbone. A great estate that single-handedly put Mozing on the map. (Jun. 23, 2016)

Sensationally drinkable, so much so I almost didn't have enough time for a proper note. Enough time, though, to note the typical Model delicacy and slate defined complexity. (July 9, 2016)

36 Euros at the Berlin duty free.

I wish we were a Riesling country. Then, besides the obvious advantage of have more Rieslings to drink, wine writers could stop prefacing their reviews of the local Riesling stuff with a spiel about the wonder of winemakers actually rising up to the challenge. But we're not a Riesling country, and it is a wonder and a challenge. And, to be quite honest, not a challenge always successfully met. This is a good wine, one that meets the challenge even if it's no GG (Doron Rav-On is the obvious suspect you'd place your bets on to make a good Riesling). It's a dry Riesling, one that leaves a salty impression on the finish and a decently complex array of minerals on the nose. (Jul. 11, 2016)

I was not familiar with this producer when I bought this two years ago, and online opinions have been split, but this is fantastic! I've drunk many great Rieslings and I have to say the acidity here is arguably the best I've ever tasted, framing and melding perfectly with the sweet, succulent fruit. The aromatics are embryonic but hint at complexity. (Jul. 13, 2016)

This sekt is more about Riesling and Mosel than the autolytic character of méthode champenoise, the Mosel green apples set to bubbles, mint and minerals, dominating the traces of brioche. What the secondary fermentation does provide, I find, is a more somber aspect to the mineral edge, even though the fruit itself retains the playful Mosel character. (Jul. 22, 2016)

Saar is colder than the Mosel, which cool climate to begin with, so this is so very racy that the sweetness is even more integrated. It doesn't really have the gossamer sparkle of Slebach's single vineyard Mosel stuff, but it's not meant to, so just enjoy the pungent green apples and specks of salt. (Aug. 8, 2016)

This is the second bottle I've drunk without writing down any notes. Could be because it was drowned too quickly for contemplative thought, or because there's no way I could ever match my notes for the lovely 2012. As usual, though, it's remarkably pure, you don't need to expend undue thought processes to get that. (Aug. 27, 2016)

Well, what do you know - an Alsatian I find I wholeheartedly love. It's sharp and focused, yet packed with flavors. It reeks and tastes of minerals and somehow packs a hefty punch in a very lithe, crystalline succulent frame. (Sept. 1, 2016)

And what's a Summer Of Riesling without Donnhoff?

The nose riffs with petrol, minerals and herbs, the fruit way in the background - so layered and complex it could reward a couple of hours of contemplation. Likewise, the palate is sheer power and grunge, albeit focused with single-minded perseverance, with enough acidity to lend vibrancy and enough sweetness on the finish to temper what would otherwise have been a quinine-like bitterness - even more so with air. I sometimes struggle with the GGs, both drinking them and then writing about them (and I think this note reflects that struggle), but with a wine like this, what eventually crosses over is the sense of place - both the vineyard and the winemaker's respect of the vineyard, vintage and fruit.(Sept. 17, 2016)