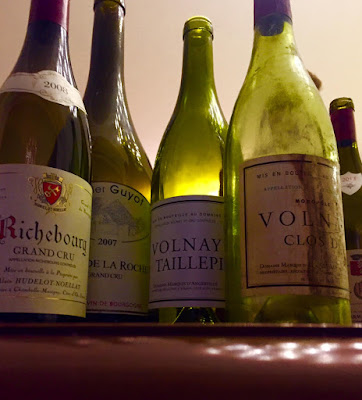 I'm not going to try to describe the game in detail. I leaned towards France because I was watching and drinking with a bunch of militant Francophiles, but I honestly could have gone both ways. Somehow I managed to see past Ronaldo's posturing and appreciate his talent and dedication, for a change.

As for the wines, this is what you get when you take a few game wine importers and their clientele. And invite Yair Haidu.

The whites were not, looking at the group as a whole, terribly exciting. Domaine Bernard Moreau et Fils, Chassagne-Montrachet, 2012 showed good balance and excellent acidity, but to some degree, the nose masked its pears and flint behind the oak. Domaine Bachelet, Chassagne-Montrachet Premier Cru, Les Macherelles, 2011 was better, the oak certainly less obtrusive, similar enough in style to declare itself Chassagne, but not really a leap in quality. Hospices de Beaune, Corton-Charlemagne, 2010 was an underachiever, oily and fat with low acidity. Domaine Fourrier, Bourgogne Blanc, 2010 was a curio, a white from the Cote de Nuits, but a nice curio, fresh, pure and rocky, and my favorite of the Bourgognes.

The best white of the lot was a Sauvingon Blanc.

The Redde family is a great Pouilly-Fume producer and this is their top wine. It needs time to express itself, but even now you get mint and nuts, guayavas and, foremost, minerals.

The reds ranged from interesting to excellent to sublime. Domaine Fourrier, Chambolle-Musigny, Vieilles Vignes, 2009 was one of the interesting, if not very Chambolle IMHO, the muscles and iron speaking of Gevrey, where the domaine is located. Chateau Palmer, Margaux, Alter Ego, 1998 also did not speak much of its origins, obviously Left Bank with its black fruit and iron, but without any Margaux opulence or sexiness. Haidu brought the Henri Bonneau, Chateauneuf du Pape, Reserve des Celestins, 1999 and thought highly of it, but while I have great respect for his taste and judgement, all I got was brett.

Marquis d'Angerville, Volnay Premier Cru, Taillepieds, 2011 was excellent and savory, with a complex nose of black fruit and spices, but very tannic and tight, giving much less than the 2011 Champans, which had really knocked me out in the past. Armand Rosseau, Gevrey-Chambertin, 2013 is floral and harmonically lush and spicy. The tannins are present but soft and well enveloped. Olivier Guyot, Clos de la Roche Grand Cru, 2007 was the final red in the "excellent" category, before we went on to the sublime. I always love Guyot and this shows the house style, lithe and sexy, floral and focused. Where is the Grand Cru? Not in the depth or complexity but in the composure and purity. Lovely.

At the heart of every lover of French wine, at the deepest core, is a lifelong desire to drink wines like the following two. And this desire, it defines and forms us. It doesn't really matter whether Bourgogne or Bordeaux is your drug, you want that moment when the wine combines the nuanced subtlety of age with the potent freshness of youth.

Sous bois maturity and a touch of sautéed fruit and coffee grains, with those mature nuances and almost poetic composure that make you swoon.

This shows a similar mature character, which belies its actual age, but it is more vibrant and focused than the d'Angerville. The nose, with its exotic spices, is ethereal.

The evening ended with, first, a Champagne that I had brought to celebrate French victory, followed by a Port, because, well, the French lost and the Portuguese won.

Primal with an extravagant mousse. It does remind me of Larmandier, who is also a Vertus producer, but at this stage, the ripeness of the fruit captures the limelight at the cost of all else..