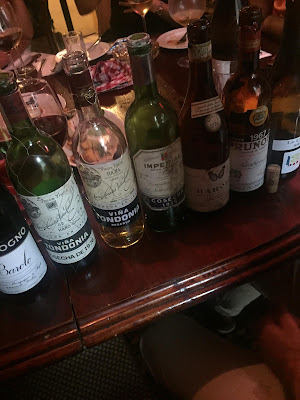 I have a vision of what a great feast should be like. The setting should resemble a pirate cavern. Or a Paris bistro with Ernest Hemingway getting drunk in the back. The jackpot would be an invitation to dinner at West 35th Street. The food should gladden the soul of hunters, farmers, poets and  blacksmiths alike. The wines should speak of both the past and future, they should be honest and moving and they should reflect somehow on the human spirit without being obvious and pretentious.

The tasting room in the back of Habasta in Tel Aviv's Carmel Market filled the requirements of both the setting and the food. It carries on the tradition set by Yoezer Bar in Yaffo, which had the same ambiance and also the same style and quality of food. A legend in the making, arguably already there.

As for the wines - I'm here to tell you about the wines.

Serving Champagne at the start of a dinner is like starting a Rolling Stones gig with "Brown Sugar". Gimmonet is like bringing Bobby Keys on stage for the sax solo. This is very focused and dry and, almost surprisingly, better than the 2002. Very long, deep and generous in doling out a full and detailed serving of brioche and minerals

A letdown after the Gimmonet, nuttier and wider, without the focus or that same persistent dryness.

This is as close to a birth year wine that I was able to manage, but that technicality aside, it fulfilled all I expected of a wine intended to celebrate your half century mark, uncannily offering decades of history in a well preserved bottle. A mature wine, on the cusp of a graceful decline, but still thriving, a testament to grape, terroir and old time craft. It begins with a nail polish aroma that evaporates and morphs into tar and red fruit. Beautifully delicate on the palate with a long savory finish. 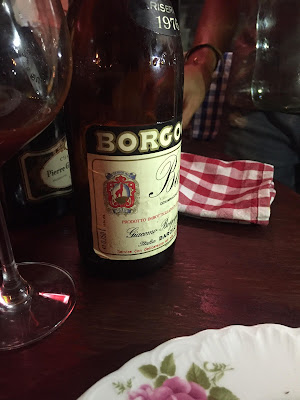 You'll see a lot of 1976's, as the feast was a co-production with Zacki Rosenblum, who celebrated his 40th (co-production? Who am I kidding, ZR brought more wines, worked out the costs and menu with Maoz Alonim, set up the whatsapp group. My main contribution was to text him from Manhattan to  let him know I found a few oldies and let's do it). We've had this specific wine before, I loved it then and I loved it tonight. Once again, it shows as a very Burgundian wine, with rusty red fruit. I can understand why Daniel Lifshitz, in attendance and playing sommelier, did not totally agree with me, but I still insist there's a family resemblance. Anyway, ethereally lovely and the first in a string of very vital forty year old.

Daniel switched us to a couple of whites, since we were served a platter of sashimi and shrimps.

Really just a palate cleanser in a dinner such as this, in many circumstances you could serve it as a village wine ringer, with a persistent core of rock and lime.

Tropical, a hint of minerals, with fantastically lively acidity. A concentrated core of lime with the Chablis minerality only showing up on the finish.

At forty years of age, the fruit still shows the fat sweetness of youth of a young Rioja, but  at almost any age, these old time Riojas have a wonderfully savory finish. 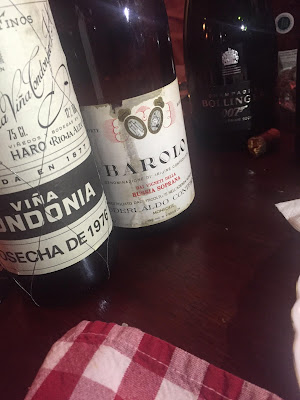 Until the Tondonia came along to give it an honest fight, this was undeniably the wine of the night, with tar, truffles, cured meats and olives delineating a superbly balanced wine. A GREAT wine!

Long and savory. Very long. Very savory. How should I put it? Riojas have a savory, pungent, almost green character that is feels as though  a particle accelerator condensed the Tempranillo and embedded it with green tobacco leaves. This is an epitome of that style. With the ephemeral body that swings between savory and sweet. Ahhhhh....

In another setting - say a long evening with it at home - this would knock me out with its tar, spices and rust. But you can see what it had to contend with, and it really comes off very young in comparison with its 1976 brother.

Chlorine and peroxide. Interesting and unique, but not for everyone.

I have yet to be impressed with this house. This wine is very fresh, for sure, but doesn't show a whole lot beyond that.

This, on the other hand, is fresh and impressive. Daniel says this monople should have been a Grand Cru. I'll have to get back on that until I taste it with a considerably less fatigued palate , but it's surely as intense and long as a Grand Cru - I'm just undecided on issues like complexity and depth.