Portugese Wines For The Summer

July 18, 2016
Even though I'm a fan of Eyal Mermelstein's Portugese imports, foremost Luis Pato and Alvaro Castro, I've shied away from the whites and roses. Until an impromptu late evening date with Efrat led to a couple of tastes that we both enjoyed, and from there to a few purchases, which then led to even more buys. You get the idea.

The impression I got from these wines can be summed up by a single word:  "exotic". These wines are made of grapes rarely cultivated elsewhere and the wines only vaguely  resemble the so-called classic wines. So while their crisp, mineral profile may superficially resemble counterparts from Burgundy or the Loire (or Champagne, in the case of the sparkling wines), there are quite a few idiosyncratic twists in the plot.

A blend of Alfocheiro and Baga. A very pale, dry rose, the quintessential expression of rose as a neutral, dry wine that surreptitiously packs floral and mineral flavors. Or, it would be quintessential if there were more understated roses like this around. (Jun. 14, 2016)

This is the kind of little wine that usually gets placed on the under card of more important wines at a tasting or gets served as an appertif in the real world where people  drink wines with their dinners. But really, if this type of wine is just a stepping stone for other wines, it is an important stepping stone in the world of wine. It's light, pale, semi dry, crisp, vaguely frizzante and bundles green apples with tempered saltiness. It's great value and you won't find it a mere afterthought. (Jun. 19, 2016) 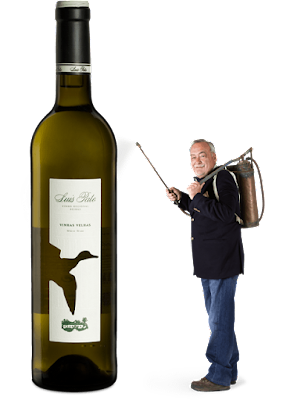 A blend of Bical (50%) from chalky-clay soil, Cerceal (25%) and Sercialinho (25%) from sandy soil. See what I mean by grapes we've never heard of? This is... different. Just think of Chablis or Muscadet transplanted over exotic fruits you've never tasted. It has a lean body, yet the fruit has an off dry feel, in contrast with elegant dryness of the nose, which shows a touch of marine air, salt and shells. The 2015, which Eyal let me taste alongside, is sweeter on the nose and drier on the palate, coming off as a mirror image of the 2013. Either one is a lithe wine and great for the Mediterranean summer, and both prove there's magic in everything Pato touches. (Jun. 24, 2016)

If I understand correctly, Castro has two white Reservas. One is a blend of the local Encruzado, Cercialand and Bical grapes, while this one is a pure varietal Encruzado. It's less forward than the Vinhas Velhas and really needs more time (at least a year, preferably two). It doesn't have the lightness of the Pato at first, although the fruit also has an exotic profile and really holds a lot in reserve. There's a fatty side to it that is the grape, I think, as this doesn't see barrels.  There is a flinty/sulphureous character on the nose (a cross between Chassagne and Meursault) and a bitter peel after taste, that I take to come from what little tannins a white grape might have, which is tempered here by pleasant saltiness with air. Worth a couple of buys. (Jun. 24, 2016)

The Vinha Formal vineyard is planted with Touriga Nacional, Bical and Cerceal grapes. Pato does a first harvest of them all for this sparkling rose, of which Touriga is the dominant grape (70%) and a later harvest produces a red, as well as an almost varietal Bical white. All are labelled Vinha Formal, and are a CellarTracker horror. Anyway, this is a really precocious bubbly, and while it won't match Champagne for the depth and the unique brioche/chalk/mushroom character, it does offer a few compensating factors. First of all, it's cheap for a sparkling wine. Not Cava cheap, but a very attractive price at around 100 NIS.

Now, I'm fast becoming a Pato fan, and the reason for that is the way the wines project both a sense of the grapes and terroir and how special they are - as well as the restless, creative personality of the man who made them (or orchestrated the group that made them; the winery produces an amazing number of bottlings each year, and I can't imagine a single man handling the workload).

That's exactly what you get here: a wine that Pato did not design to try and match Champagne weight for weight, assuming he could (of course you can drink Champagne in summer, but that's really because you can, and should, drink Champagne every day that you can. But Champagne is not specifically intended to be a summer drink), but designed, rather, to exude the joy of Levant spring and the twinkling eye of Luis. And there's something else besides the sheer drinkability, something that will keep me buying more of this: a streak of scorched earth and savory tobacco leaves that offhandedly conveys the essence of Touriga and echoes the character of Pato's reds, without, obviously, any of their weight. (Jun. 25, 2016) 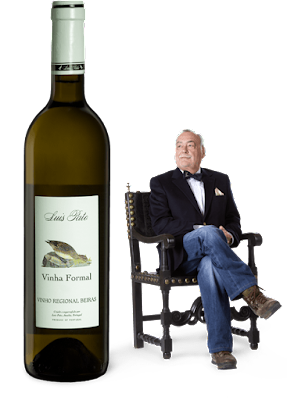 This is the Vinha Formal white, comprised of 85% Bical, with 15% Cerceal, and, like the Vinhas Velhas, it is a very mineral laden wine, but not the flint/crustacean minerals of the Velhas, more of a herbal/dusty character, not unlike garrigue. In that sense, it reminds me of Rhone whites, but with an acidic zest that bursts with focused precision on the saline finish. I suspect it's the kind of wine you either love or hate and surely takes you off the beaten track. (Jun. 27, 2016)

A sparkling wine made of the indigenous Maria Gomes grape (also known as Fernão Pires, grown extensively throughout Portugal and elsewhere only in South Africa), this is a spicy, very dry and chalky/salty wine. Obviously a DYA quaffer, but an interesting one. (Jul. 2, 2015)