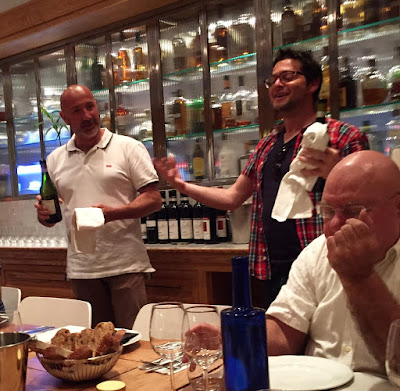 I drink so much Burgundies that getting into the harsher Piedmonts (especially Barolos) is always a shock. That's why I could never figure out why Nebbiolo is often compared to Pinot Noir. Sure, both homeland regions are famous for putting terroir on a pedestal, but to be honest, while I enjoy the Nebbiolo-based wines of Piedmont and can judge their merits and assuage differences in quality, the harsh tannins and acidity always obscured, for me, the nuances of vineyard variations. No matter how much I have enjoyed the complexity and charm of old school versions.

Eventually, my Piedmont epiphany was bound to arrive. This small house, Giacomo Fenocchio, does indeed craft wines that discourse, however cryptically, on the different apparitions of the family's vineyard holdings. "Buy them now, they're on the cusp of stardom " - some say, not least their local importer. You can choose to ignore the hype, but don't ignore the wines; their quality is just about matched by their fair price, and their tasting price is a joke (it's the second price listed after each wine below).

The Arneis grape is usually considered a bit of a throwaway by most wineries, but this is lovely and moreish, with a sweet floral musk and a light crisp body that packs intensity without weight or fatigue. It comes off as finely structured Malvasia, which is good. I like Malvasia for quaffing and the Arneis provides that with an additional modicum of intellectual pleasure as well.

Another throwaway grape, considered a precursor to Nebbiolo, hence most wineries are wary of wasting vineyard space on it, instead of planting, well, more Nebbiolo. Fenocchio opts to keep at it, and good for them, and us. This has a lot of traits common to beloved rustic wines: leather, black pepper, barnyard, while on the other hand the same tar and dust/spices as Nebbiolo. Tannic and lean with some room for improvement, this is, for my tastes, a good choice for a house wine.

And now we reach the holy grail of many lovers of Nebbiolo: Barolo. The basic bottling is quite a good deal, while each of the crus is subtly, yet distinctly, individualistic.

A classical Barolo nose, complex, tarry, herbal, while the palate is typically tannic, yet those tannins are savory enough to make this enjoyable even now. I'd enjoy coming back to it in five-ten years.

Reaching the Castellero right after the generic Barolo, the spices on both nose and palate come off as heavier, almost like coffee grains, yet they make for a very expressive effect right now. It helps that the tannins are, again, savory, almost saline. In Burgundy, this would be a village lieux-dit only, as its rusticity makes it an expansion of the basic Barolo, whereas the other crus, starting with the Cannubi, branch off to more aristocratic, involved expressions, making them the equivalents of Premier Crus, even Grand Crus.

A more elegant nose, soft-spoken, flowery. The palate is tannic, yet more approachable than the Castellero. For about 10 minutes. Then it closes seamlessly. But it still shines for enough time to get a sense of its depth and finesse.

The most special, expressive nose of the 2012 crus, loaded with  tar and spices. And the ripest fruit, in the context of the regional and house styles - it would be hardcore in most settings. The saline tannins soon assert themselves and the Bussia exits stage left, to (hopefully) emerge in the third act, some ten-fifteen years from now.

The Villero makes an understated case that there is, after all, a similarity between Bourgogne and Piedmont. While the nose is clenched at first, it opens to show a perfumed, soft, floral character almost Burgundian, while the palate is the most balanced of the four, eerily and poetically fetching.

The 2012 crus were presented in very appropriate flights of pairs, showing that the Bussia and Villero are the elegant crus, the Castellero and Cannubi the heavyweights. The Bussia, 2008 (not for sale, Giacomo brought it with him) gives a good sense of their potential, also of the longevity, as it's just starting to express itself with a flourish of rotting leaves.

The Fencchios also make a Riserva, always sourced from Bussia. The Riserva, 2010, which sells for 550/399 NIS is currently inscrutable, with a lot of iron and rust on the nose, but that's basically all you can get, right now. So, for a prescient sense of the future, we were presented with the  Riserva, 2001, whose gracious and complex nose combines the elements of all the wines we've tasted, and whose muscular veneer is starting to show the charms of a maturing Old World don.
Giacomo Fenocchio