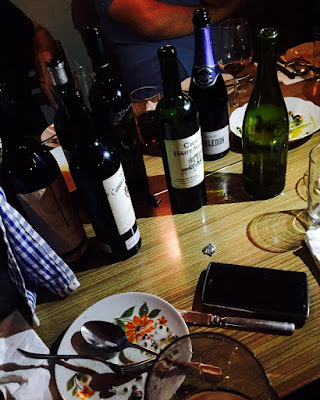 This was one of those evenings where the food, the camaraderie and ambiance were all great, but the wine lineup was too eclectic to actually be as great. On the plus side, it was all very educational and we drank a few things we wouldn't have, if this was the kind of evening where people were just trying to impress each other. For example, the Astrolabe Chenin Blanc: we were going to skip it because the people-to-bottle quotient looked to be a medical disaster, but it was too interesting to pass by. I mean, I might not have actually bought it myself, but if someone brings something like that to the table, I definitely want to taste it.

This is an English bubbly that has been spotlighted at the hip London wine bar, Noble Rot. For my money, it comes off on the level of a decent Champagne house n.v., but not at the interest level of the grower stuff - it's just not very expressive and a little too sweet.

Yeah, this is definitely not a wine we'd usually be drinking. 1996 was a vintage where the GHW style was starting to become riper and more alcoholic, but to be quite honest, I'm not a big enough of a follower to be sure. Anyway, when people talk about how well the GHW wines age, they should not use this bottle as an example, despite the Katzrin being the flagship wine yadda yadda yadda. The nose has some interest, with old wood and balsamic vinegar, but it's a sort of a generic mature nose, nothing especially distinctive, and the wood is too prominent on the palate. So maybe it was great in its day, but that was the day of the iPhone 4 at the latest.

Matrot should definitely do better than this bottle - which probably needed more time, either in the cellar or before or after pouring. Decanting might have been a good idea. This is mute on the nose, one-dimensional on the palate. All you get is lime. I'm a fan of the domaine and I always recommend it, so please wait on any 2013's and don't repeat our mistake.

We've been drinking bottles of the 1999 over the last few years and finally moved on to 2000, which is notorious for the Robert Parker score of 79. Now, it is rather small scaled for the vintage, but that 79 is just silly, Parkercentric. and displays pathetic ignorance of what made old school Bordeaux such a delight. This is a very classic claret: balanced, compact and detailed, with black currants, earth and cedar in the background, a touch of brett even further in the background.

Here we have the Astrolabe style ( lightly tropical, pure, and expressive in a clean way) applied to Chenin, and despite the salinity and mineral overtones, there's nothing here that recalls the Loire versions, and I'm thankful for that. I don't like rip-offs.

Avi Feldstein offered us a preview of one of the wines in his new boutique. This is another example of the kind of wine I can't refuse to taste, even at the risk of liver damage. For two or three reasons. Sauvignon Blanc is a grape that does so well in Israel that I think it might be the best white variety, while Semillon seems to perform well when local wineries try to make something of it. The combination is, of course, the classic white Bordeaux blend, and I adored the precedent set by Ya'acov Oryah, who made excellent wines out of the blend at Midbar and Psagot. So that's the first reason - interest in the wine. The second reason is the man who made it. Avi is a dear friend. If I have to choose between two wines of equal quality, I'll choose the one made, imported or sold by the nicer person. All the more so if it's a friend. Trust me to be objective, okay? In this case, the friend happens to be one of the half dozen or so winemakers who heralded the first wave of quality Israeli wines in the late nineties, and this wine, along with some he's made over the last decade, show he's still in the major leagues. I like wines that can convey tense silence and that is what we have here. It's nubile and raw, but very balanced and refreshing and very true to what the blend is supposed to show, without being a conformist.

Finally, a couple of carets that illustrate trends in the latter day wine world.

I remember my first Canon-la-Gaffeliere. It was a 1998 and one of the wines that made me fall for Bordeaux. This, despite classic cedar notes, is on the extracted side for my tastes, even though it's not actually over the top, just that with its ripess, the effect is too modern, like someone almost getting classic claret right. This is damn hard to nail, because with air it gets so close to settling down to the mold without actually getting there. This being my last bottle, I'll have to revisit the 2000 in five-ten years, but for now, this reinforces the notion that Bordeaux is just so influenced by trends and critics -  I mean, no one wants to get a 79, hahaha,

This starts out riper and sweeter than the CLG, but the given the bigger size of the wine, the ripeness works, and eventually it settles down - and you know what, it is quite a lovely claret despite my misgivings about its modern bent, just as good as any mid-tier, latterday Bordeaux chateau trying to balance modernism and tradition.
Astrolabe Canon-La-Gaffeliere Chateau Haut-Marbuzet Domaine Matrot Feldstein Golan Heights Winery Hambledon Ridge