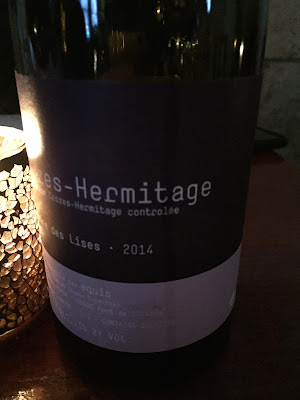 Lushly perfumed, a sexy, silky glove covering an earthy core of black cherries, with the cool, languid elegance I have found in the wines of the Domaine in the past - albeit without the detailed complexity and depth of the Premier Crus. The big picture is, I'm very pleased with it. (May 6, 2016)

I don't like young Bordeaux much, and 8 years old is a young Bordeaux, even for 2008, which is a good, yet friendly vintage. The nose is excellent, black fruit with smoke and rock, but the tannins are still bitter, even after a couple of hours. At the core is the classic claret form and the Pessac accouterments of minerals and smoke that I mentioned. The modern wine making doesn't take it into the realms of over-extraction, but there is a bland polish that renders it a bit too safe and round. (May 7, 2016)

Wine Route, this cost me 150 NIS in futures, wow, I can't believe we could once buy good Bordeaux for that price.

This is the domaine of Maxime Graillot, son of Crozes legend Alain (arguably the best producer in town).  Pere Graillot goes for whole clusters, whereas Maxime de-stems, which might account for the the plusher, less tannic result - yet Maxime also works at the family domaine and has retained some stylistic touches. The end result is a floral, complex wine with velvety, limpid, effortlessly succulent fruit hinting at bacon. (May 13, 2016)

I knew this is Hureau's 'serious' wine, I just didn't expect it to still be this seriously closed. It's brooding, almost petulant, monolithic black fruit, which is adorned by notes eucalyptus and distracts, at first, with alcoholic band-aid funk. Later, I find hints of black pepper and ozone drenched earth. Cabernet Franc doesn't produce massive wines in the Loire, and this isn't a massive wine, but it does impress as dense and it's almost aggressively tannic, and so tight, it seems like it still hasn't escaped the cold cellars of the Chateau, and won't for at least five years (cue Dylan, "You Ain't Goin' Nowhere"). (May 26, 2016)

The trend is to be anti-oak, and I've been guilty of that. But oak is useful and, for certain, grapes, necessary. Chardonnay takes to it - there's a reason it's used to such an extent in its homeland in the Cote d'Or. Lewinsohn models his Chardonnay on the Cote and so the oak is obvious, both in the the texture on the palate and the aromas of roasted nuts and flint it coaxes. Knowing how this wine behaved in past vintages and in different stages of its life, and judging by the balanced ripeness of the fruit, I suspect that the oak will become less obvious in a couple of years. But you can still enjoy it now, for two reasons. One, the quality of the fruit provides enough pleasure. And two, the subtle and precise winemaking technique is, in itself, an intellectual pleasure to witness. (May 27, 2016)