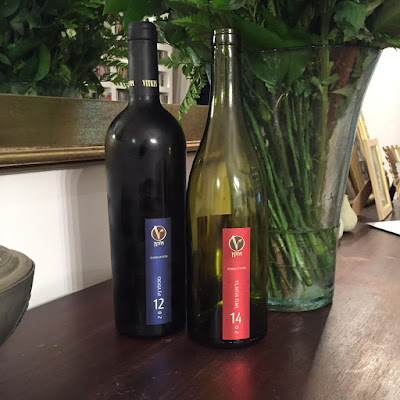 Vitkin have never bothered with very obvious wine grapes. Their claim to fame has always been their Carignan and Petit Sirah. Over the the last couple of years, they've added a few more varieties, which are also off the beaten path in Israel and which expand on the Vitkin house style of characterful wines that eschew excessive polish and go for a funky punch.

Considering that Gewurztraminer is very popular in Israel - easily recognizable, extroverted and, when off dry or sweeter, lush and friendly - it's quite surprising there are not a lot more varietal wines made locally. Equally surprising, considering Assaf Paz' track record at Binymina, is that Vitkin has never released a Gewurtz as far as I recall. Well, now they have, and it's perhaps the first dry one designed to be a top tier wine. This is arguably even drier than its Alsatian peers, with rose petals, minerals and salt rather than litchi and white pepper. It's so dry it's even a little aggressive right now, but lurking behind, and around, that aggression is a lot of personality. A good first effort, that right now is bones and sinews and needs to put on weight and muscle. In that sense, it continues the stylistic direction of the other Vitkin whites, specifically the Grenache Blanc. 85 NIS. (Apr. 21, 2016)

Candied and closed, with hints of tobacco leaves and back and white pepper, which become more pronounced overnight. That day's worth of air also brings out a floral element and fleshes out the palate, so that the finish leaves a wonderfully saline impression. There's plenty of promise and I applaud the introduction of a new varietal wine to Israel*, especially when the implementation is so much lither than the obvious benchmark, the Southern Rhone. 140 NIS. (Apr. 22, 2016)

* Galil Mountains also makes a Grenache, which I haven't tasted, but it's not designed to be or marketed as a premium wine, as far as I know.

This isn't the first appearance of Tempranillo in Israel (I recall Binyamina, Assaf's former employer, has or had one) and it really captures one aspect of the grape, with a pungent nose laden with iron and iodine, as well as a dose of brett and a sweet musk reminiscent of old wood. It's full of personality, albeit it does not seem to be a wine that is built to age (as opposed to Vitkin's Carignan, Petite Sirah - or the Grenache, for that matter) and a lack of structure detracts from its interest quotient. 140 NIS. (Apr. 25, 2016)