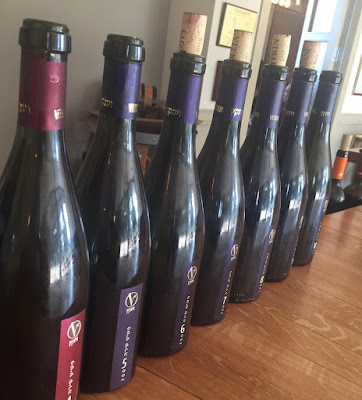 My affair with the Vitkin Winery is easy to sum up. I came in the door because of the Carignan, I stayed the night because of the Petite Sirah. On the way, I got to knew winemaker Assaf Paz. Which was a good thing, as my buying strategy for Israel wines is to buy wines made by people I like and appreciate. It always pays off. Although it could be because I'm just too ornery to like bad winemakers.

I digress. The reason I love the Vitkin Petite Sirah is that it recalls North Rhone Syrah, without being a copycat. Before I go on to the tasting notes, this is as good a time as any to mention that Petite Sirah is not related to Syrah. It's real name is Durif and it's mostly grown in California and Australia. And Israel - Wikipedia makes a point of that. So it is probably a good a grape as any to turn into a local icon. Anyway, it's sold as Petite Sirah, Petite Syrah and various spellings and permutations.

The notes, then. There are three things to bear in mind while tasting through these seven vintages. One, Petite Sirah handles the heat of the local climate very well (Assaf told me he has to make relatively minor adjustments to the acidity). Secondly, the even vintages over the last ten years have tended to be warm, while the odd years are cooler (even with the heat of the local climate, such differences can be more telling than you'd think, especially with a grape like Petite Sirah that is suited enough to the climate as to be able to reflect such differences). Finally, Vitkin sources the grapes from several relatively old vineyards - in fact, the last two vintages have included grapes from forty year old vines.

As I wrote above, this was a warm vintage. Nonetheless, it shows traits that would be common to all the vintages we tasted: graphite, flowers, black and white pepper, a hint of meat, sweet black and blue fruit underlined by rusty tannins and good acidity. The kind of Petite Sirah where it's clear why it was long considered a relative of Syrah. In fact, most of the vintages comes off as a "Girl Next Door" to Cornas.

This was the first vintage to use grapes from a vineyard planted in 1974, which is very old in Israeli terms. I like the style of both, but prefer the 09 for the greater elegance and more focused acidity.

Assaf says 2008 was a hybrid, a warm vintage that managed to preserve the elegance of the cooler vintages. This has potential, but it's very backward, which can be, in the right context, a sign of a great wine - in that sense this has the potential for being one of the best of the lot. The aromatic character is what I look for in North Rhone Syrahs (again, the benchmark for the discussion of this wine), but it is the least expressive wine of the tasting, even through several sniffs and tastes. Only after about 90 minutes, when the glass was almost empty, did it start to show savory flavors and nascent expressiveness.

The leanest of the lot, and one of my favorites, for the tertiary aromas, the lovely acidity and very savory tannins. This is just the kind of mellow maturity that thrills me in minor Old World classics.

A ripe wine that I suspect will not evolve much longer on the palate, although here, too, the tertiary aromas are very appealing. If you want a sample of a mature Petit Sirah, you could choose either 2006 or 2007 depending on the mouth-feel and ripeness level you are looking for.

This was the wine that won me over when Assaf poured it for me last year, and it is arguably the peak of the Vitkin Petit Sirah style. It is akin to the 2007, as it has the same meaty tertiary aromas, with perhaps a touch of Old World mildew and balsamic vinegar/vegetable stew a la Rioja to make things even more interesting. Yet the structure also nods at 2008.

Mature, yet thriving, but the balance of sweet and savory is not as taut as in the 2005 and 2006.
Vitkin