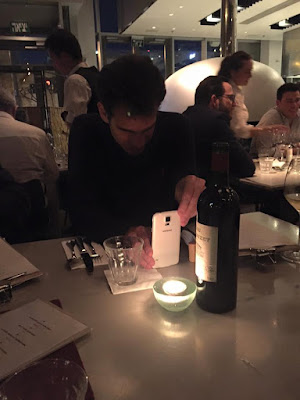 Here is a man, a good friend, who, like me, recognizes the virtues of drinking great wines with great company. Like me, he documents the moment for posterity.

He is a master. A Master of Wine.

This is basically a late disgorgement version of the Tradition Cuvée, and all the more complex and captivating for that, with baked apples, mushrooms, yeast. The fruit is ripe, yet fresh with a dry finish.

Not sold in Israel. Eldad Levy, who imports Chiquet, has a few bottles for his private consumption.

This should have been a exceptional wine, but it isn't, just very good, almost as though it phoned in the pre-requisites and left things at that. So you get slate and chalk, and lime, and red and green apples on the nose, but without that extra bit of complexity and depth I'd expect from one of the world's greatest vineyards. The palate doesn't feel as dry as I'd expect from a Großes Gewächs, as the fruit is so full and ripe that it creates an off-dry impression. And, again, there is no wow factor or, failing at that, anything that would make me pause and contemplate.

Mature Bordeaux: this is why we hunt it down. The Haut-Marbuzet doesn't have the the greatest length, but it is quite lovely with earth and leather laden currants. A serious over-performer. And in some way, I like it more than the next wine: it's more complex, with that mellow sense of joy that a claret at its peak can provide.

Houses like Sociando Malet is why we kill for Bordeaux. Kill, I tell you! Even though, as I said, the Haut-Marbuzet chimed in better for me, despite the fact that 2000 is the better vintage and that Sociando is usually ranked higher.The initial brett stink is understated, if it is there at all, as it makes way for red fruit, some black, on an earthy background, It will probably be greater than the Haut-Marvuzet in, say, ten years, but right now, despite the length and weight, and despite an early impression of elegance, it is in a backward, foursquare stage.

An intense mix of sweet fruit and bracing acidity, in fine, focused balance, and the Mosel gift of frozen slate and apples.