March 08, 2016
What began its life as a Northern Rhone tasting took on a different bent as the result of a visit by expatriate winemaker Maayan Koschitzky, who brought with him three different vintages of high altitude Napa Syrahs from Lagier Meredith, a winery owned by UC Davis alumni professor Carole Meredith, a pioneer of DNA typing. She was the one who identified that Zinfandel is the same grape is the Italian Primitivo - which is probably one of the first things you ever read about Zinfandel - and she's in the Vitners Hall Of Fame.

In the end, though, the Mt. Vedder Syrahs had to contend with a Rostaing Cote Rotie at its prime. It' wasn't really a fair fight. La Landonne is arguably one of the top ten Syrah vineyards in the world and seventeen years is old enough for a top flight Syrah to dazzle you with nuances, but not so old that the fruit has started to decay. 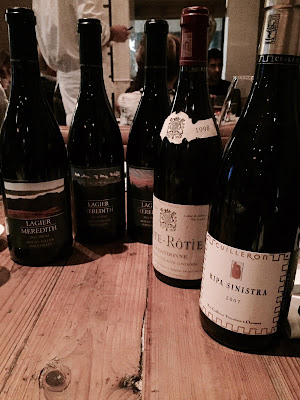 The first order of business was, of course, Champagne. Luckily, we did not even consider matching this up with a New World version.

I mostly drink grower champagnes, and the first thing I noticed with this 'big house' champagne  was how tame it seems. It's elegant and restrained, with brioche and minerals - lots of minerals - and very precise weight, but the growers's stuff have a wild streak and a conniving punch, Anyway, very good, make no mistake about that, just much more Roger Moore than Sean Connery.

A cool vintage, that Maayan called almost under-ripe. I guess that needs to be taken in the context of Napa, the place and the style? This wine comes off as ripe as most Bordeaux vintages, more often than not, are like this these days, but even if its sweetness is very proportionate, it's nowhere as lean as the North Rhones I adore. But enough comparisons. In its own right, the black pepper on the nose is lovely and the tannins have a wildness that grabs and holds my attention.

This is a rounder wine, the nose arguably better, certainly more complex, but I prefer the 2011 for its insinuation of wildness.

The most balanced wine. Sure, it's ripe, just as ripe as the 2012, if not more. But the balance is such that it feels more focused. The complexity is greater and the typical pepper is more effective. But for my consumption and tastes, I still vote for the 2011.

All retail for about 50 USD.

This is a Syrah grown outside of the North Rhone AOCs, from a vineyard on the slopes of the Coteau de Seyssuel north of Vienne, on the west (or left) bank. I love Cuilleron for the feral funk this shows - you could argue, and we did, whether it's brett or the grape or winemaking, but one thing I'm sure of, this isn't dirty funk. I also love the plump fruit of the Cuilleron reds. And the black pepper. In short, a terrific wine, and while I prefer the style, it's not obviously and clearly better than Lagier Meredith. But the next wine is.

A classic North Rhone Syrah poised at the point where age lends it a certain Burgundian mellowness. Which is my favorite expression of the grape. There is an inexhaustible store of ethereal nuances on the nose (smoke, black pepper), and the tannic bite teases and leaves a a saline impression on the palate when it's done with it.