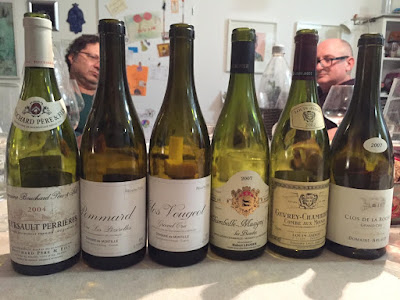 Brother Zacki put together a brand new Bourgogne tasting group. I got suckered into it, like he knew I would. I love the company and I love Burgundy. However, the kickoff tasting highlighted a sore point.

The 2006's initially held great promise of classicism, for me, anyway, but they then went into a charmless shell. Merchants in need of a sound bite call it a vintage for purists. But the press calls every vintage that is not blatantly ripe (2003, 2005, 2009) a purists' vintage. I'm a purist and I prefer 2008 and 2010. These are the real deal for hardcore Bourgogne lovers. And the 2007's can be a real joy for us as well, an easy going joy. But not, as the following notes will show, the 2006's.

This is usually a Champagne I adore, but this time it lacks the usual chicken broth that has capivated me in the past and the mousse is very meager. An off bottle, perhaps?

This is tight, stingy at first, and even when it opens up, it remains very lean, coming off as a compressed Meursault. It stays away from the hardcore, fat Meursault school of yesteryear - even the typical nuts show as nut oil. But along the way, it has lost some of the charm it had when it was younger and now seems almost too lean for comfort.

It starts out earthy, a little metallic, but with some forest floor, and then air brings out flowers, iron and pungent minerals. The general consensus is it would have been a good Village wine, and while I am a little more generous, I agree it lacks the obvious stuffing of a Premier Cru.

The nose is detailed enough,with forest floor and leather, but not really expressive or vibrant. The palate s even worse, without the length or depth of a Grand Cru. Useless for all intents and purposes.

Wow, I don't know how much this cost back in the day, but the recent vintage is listed as 960 NIS at the Burgundy Wine Collection site, making it the most expensive red in the Montille portfolio, barring the Vosne-Romanée 1er cru Malconsorts cuvées, and in general expensive for a Clos Vougeot.

So these 2006's obviously did not spark. But it could be de Montille reverting to pere Montille's non-user friendly, austere style.

I've always loved what I had from this house, and this is no exception. Very complex and deep, yet electric with vibrancy, with typical Chambolle flowers and exotic spices along with fresh red fruit and iron. My wine of the night.

Everyone seemed to like this more than I did. I found it too overworked, with a convoluted nose that is exotic on the surface but really tries too hard. The palate is decent plus, but the tannins are very drying, and even at thirteen years of age, I think a 2002 Premier Cru should be fresher.

The nose is lovely, languid and redolent of rotting leaves. Tasting it blind, I thought it had a vibrancy that was testament to how well the wine had aged, because I had pegged it as late 90's. Everyone else did, too. So, its quite a letdown to learn its true age, because, while it's vibrant enough for a 16 year old, it is surely more mature than you'd expect from an 8 year old Grand Cru. Many of us have noticed that imported Arlaud's have aged faster than bottles purchases abroad. A shame, as, at its best, this is a marvelous domaine.
Bouchard Domaine Arlaud Etienne de Montille Hubert Lignier Jean Lallement Louis Jadot