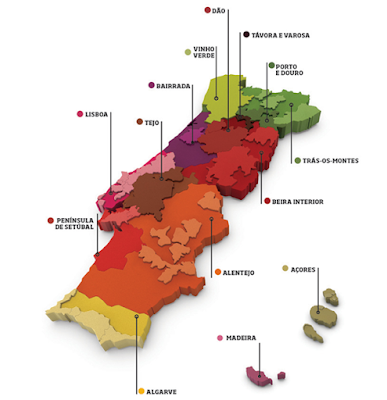 I paid Eyal Maron a visit, had a late lunch with my kids and tasted a few Portugese wines. It was really an excuse to buy some wines, but it was such a lovely afternoon that even a flat tire didn't damper my mood. I'm going through my new stash now, and I really love their style. I owe Eyal for introducing me to the region and I think the wines deserve an annual review. Portugal has a number of interesting indigenous grapes that are full of punch and personality.

The bottom line is, Luis Pato rules! But I wouldn't kick Álvaro Castro out of my bed.

Duoro is, of course, the famous home of Port, but the last decade or two have spawned many excellent tables wines, such as this one, with its Old World reserve, with charm borne of inherent spiciness of the fruit (a blend of Touriga Nacional, Tinta Roriz and Touriga Franca). Texturally and structurally, it comes off as Medoc, transplanted to a different locale, in vigorous maturity. The flavors, though, are wilder, spicier than a claret's, while the acidity is marvelously fine. This is aged for a year in new French barrels, according to the winery's technical sheet, but the oak is virtually unnoticeable. Either the grapes take well to oak or the wine-making is very sensitive. I love it. (Dec. 30, 2015)

I tasted this in May when Eyal organized a Portugese wine and food festival, and I felt my note was too cursory, given that even short stand up taste was not enough to obscure how excellent this wine is. Luis Pato is one of the stars of the Bairrada region, specializing in the difficult, yet signature, Baga grape. This is a single vineyard bottling, from ungrafted vines, and it has iron, meaty aromas - as well as a funk that I perceive as a character of the grapes, rather than lack of hygiene or brett (I find the same thing in Carignan sometimes). The tannins are very supple and savory, if still puckering, and the acidity livens up the black and red fruit. This is simply a very appealing wine, and still young. Glad to have another bottle to age. (Jan. 1, 2016)

Litchi and guayavas galore, a refreshing delight, with a salty finish, reminiscent of a dry Scheurebe. (Jan. 2, 2016)

This is a blend of Aragones (local version of Tempranillo), Alicante Bouschet, Touriga Nacional and Cabernet Sauvignon. The nose, especially, reminds me of Nebbiolo, with a similar spicy/tarry character, yet with a unique, piercing herbal streak that is very far off from anything Piedmontese. It's full and ripe, but the black/blue fruit is tempered by the acidity and tannins. I like it less than the previous two reds, but it really fits the bill as a cold winter evening wine. (Jan. 8, 2016)

I was intrigued by the interesting spices when I tasted it with Eyal from an open bottle, but the bottle I had at home was marred by bitter tannins. Nevertheless, this is a good bistro wine from a workhorse grape usually used to bolster color, which is probably why Eyal called it the Portugese Argaman. Or maybe because Sousao was crossed with Carignan to create Argaman in the first place. (Jan. 9, 2016)

It seems Luis Pato is the most consistently special producer in the catalog (along with Alvaro Castro). This is an example of an especially creative mind, as it is a red wine comprised of 94% Fernão Pires, which is a white (!) grape and 6% Baga. Pato, as I wrote above, is a master of Baga, and this outre blend somehow works, as the two grapes combine for a very Burgundian effect (although the wine doesn't work well in a Bourgogne glass, believe me, I tried). It's an earthy wine, transposing the spicy kick of Baga unto a mellow tapestry and a lithe frame that encourages a saline finish, one I didn't find in the other reds. (Jan. 9, 2016)

Unlike most of the Pato wines (at least the ones imported to Israel), this is made of Touriga Nacional. The vineyard is young, but the yields are comparable with old vines. Enough forensics. This is elegant and saline, with red and black fruit that are layered with minerals and smoked meat and shows a funk similar to the the Vinha Barrosa. (Jan. 15, 2016)

I knew this report wouldn't be complete without one of Álvaro Castro's flagship wines (the other available locally is the Pape, which I drank and loved last year), but the bottle seemed off when I opened it, so I moved on to another wine and stuck this in the kitchen fridge for cooking purposes. I returned to it four days later, which, honestly, is something I never do. I guess it was never off. What bothered me the first day was that it seemed flat, with little tannins. Just dumb. Days later, it's more than tannic enough, with an earthy, spicy nose halfway between Bourgogne and Bordeaux. The palate, though, is in a land of its own: lithe, yet muscular, with a long, savory finish and flavors that have more to do with tobacco and jamon than with fruit. It will need about five years to show its best. (Feb. 1, 2016)

The  Quinta da Pellada would have been a fitting finale for this month long love affair. Except I ordered a couple of wines at a Saturday brunch before this post 'went to press'.

Since I now realize the flagship Castro reds need time to mature, I will content myself with this pretty mid-tier red, with its floral, earthy fruitiness and vibrant freshness, and a measured bit of rusticity. Like the 2011, this gives the impression that it was picked at its phenolic peak, just before the fruit started to lose its verve. Terrific acidity that vitalizes the palate, black cherries, earth and iron aromas that spark the heart. (Feb. 6, 2016)

Tasted this alongside the 10 Years version. The Ten Years was a fruity version of the tawny style, thus the roasted nuts were not at stage center, whereas they were in fact the centerpiece of the older wine (similar to the way the fruit is the supporting actor with dry Old World wines). It's a meditation wine, not a dessert wine, designed for the aesthetic pleasure of sifting through its nutty, leather nuances. (Feb. 6, 2016)