February 02, 2016
I need to get out more, vary the routine. It's like I'm always drinking Bourgognes with the same people. On the other hand, if I had to send Santa a list of wines for Christmas, I'm sure Lamy, Burguet, Guyot, Merme et al would be on it. 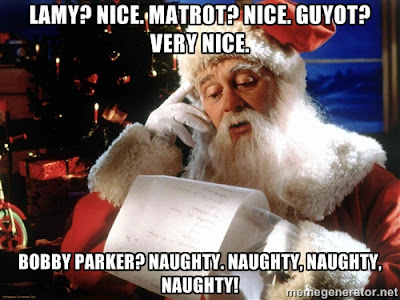 The setting this time: Eldad Levy and Daniel Lifshitz organized a small end of year tasting of the Bourgogne Crown portfolio at the Norman, a Tel Aviv boutique hotel,

In lieu of the usual Champagne, a 'simple' red was served as aperitif.

This is basically just a house wine, but I vouch it's one of the best house wines you can find, with tasteful red fruit aromas coupled with light earthiness, and a very inviting, soft palate that is more floral than the nose. 165 NIS.

After the aperitif, we went on to three young whites and a vigorously mature one. I'm a big fan of Lamy and Matrot, buying a few bottles from each year's catalog. The other two are also very good, and I enjoy them tremendously when I chance upon them, but don't buy consistently.

Gorgeous nose: flint and dried grass, pears flecked with Atlantic salt. Fine acidity (the Lamy signature) provides structure, but, having said that, this will be even better once some baby fat is sweated off. 365 NIS.

If you were to ask the enlightened Burgundy lover what is the most off-putting aspect of Chassagne, I wager the typical answer would be its four-squareness. I've tasted Morey-Coffinet a few times, and while I have found them at times to be in a four squared stage, at their best they prove to me that this is one of the Chassagne producers that can break out of that mold. Likewise, here I get a sense of the inherent balance, so even though the spicy oak is too obvious, I think it will integrate with the fruit, which is about pears, basically. At any rate, it's lovely to sniff: floral, with a minerality that is very rocky and salty. 380 NIS.

None of the young whites were quite ready, this even less so - and they had all been open since the morning. The lovely nose shows a complex lattice of minerals, some white meat. The palate is fat, but, where the Lamy and the Morey-Coffient balanced that fat with acidity, here the balance comes from the density of the fruit. 500 NIS.

This is, basically, a very communicative, wide wine, that has gained focus in bottle and is sure to be a crowd pleaser. Granted, that crowd would by nature be lovers of clear, saline whites, but it does lack some subtlety. 390 NIS.

People call Gevrey sauvage, but for me, that has to do more with the personality of the wines, rather than animal aromas and flavors per se. Anyway. Red fruit and minerals, here, as well as a hint of flowers . The minerals provide force, but this is basically a likable, straightforward, clear wine with no artificial flash, yet with enough nuances to urge to reach for it. Lovely. 390 NIS.

Every time I drink a Charmes from this house, I almost overdose on the flowers. They're everywhere, both on the nose and palate. With 2012, the florality is even denser. In fact, everything this about this wine is dense. In Burgundian terms, anyway. Even the fine tannins are dense, which is not to say the wine is muscular. It's not. It's quite elegant. It's just that its texture is dense. Beyond the flowers and the tannins, it packs red fruit and exotic spices. 620 NIS.

Burguet always makes very floral wines, even in Gevrey. But don't expect the same type of flowers as in the Charmes. If I knew my flowers, I'd tell you which is which, but I don't, so all I can tell is it's a different bouquet. The end result is very Vosne and very harmonious and tasty, with integrated saline flavors and a complex fusion of spices and flowers. 750 NIS.

Because 2011 is very approachable and because, like all the wines, this was opened in the morning, you can get a good feel for this Grand Cru. And a lovely, sexy, fluid Grand Cru it is, lush with intoxicating wild fruit and flowers. 990 NIS.

This, on the other hand, is still very primal, putting all its weight in the sweet, but firm, mid-palate. It's opaque, yet there is a purity to it, and even clarity. How can a wine be both opaque and clear? Let's just call it another example of a great wine's contradiction. 850 NIS.
Alain Burguet Domaine Amiot Servelle Domaine Buisson-Charles Domaine Gerard Julien Domaine Hubert Lamy Domaine Matrot Domaine Morey-Coffinet Domaine Pierre Duroche Olivier Guyot Taupenot Merme