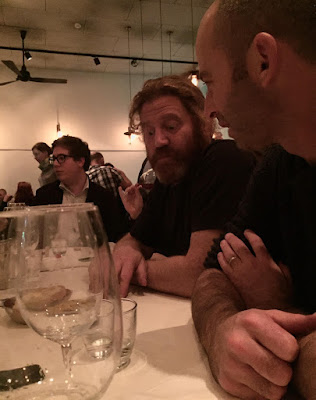 These are notes from a dinner at Bertie in honor of visiting ambassadors from the famous barrel-maker firm Cavin, one of which is pictured to the left, above. Accompanying the dinner (great as always) were wines matured in their barrels, except for the first two.

I'm not really convinced by this sparkling wine, made by a "New Wave" Meursault producer. It's fruity and floral, with light minerals that assert themselves in time, a nice nose, but a little too loose on the palate.The second bottle (opened because the mingling part of the evening required plenty of wine in its own right) was more structured and interesting.

This, on the other hand, is always a pleasure to drink. Although there is an initial abundance of oak, probably due to warm serving temperature, the minerals assert themselves in time. A mini Chassagne.

We had a bad experience with a Corton from this same producer earlier this year, but this is much, much better. The nose is closed, but shows minerals when it opens and a hint of Corton honey and spices, while the mouth is very generous, inasmuch as classic Bourgognes are generous.

A different style of Chablis, an oxidative wine-making style according to the professional winemakers in the crowd, but it does show the classic oyster-y character of Chablis, even if the wine comes off more mature than it actually is.

A fun wine from a producer I've been indifferent to the few times I've tasted it. This has joyous, succulent fruit, with pepper and minerals.

An obscure producer, I think, so this is a surprise, with restrained elegance and measured amounts of earth and spices. The kind of wine that makes you come for it but greets you half way. Even at its miserly youth.

This is a very revered name, the heir to historic Henri Jayer, who was really a revered name in Burgundy. This tempers an intense mineral vein with balanced elegance, more than you usually find in Nuits. Special.

The Mugneret family is a known name, but I'm not sure I'd call it a revered name, and certainly this is less a wine to revere than the preceding two. The nose is evocative in a restrained way, but the palate has much less structure and breed.

Now this is a wine to be revered! it is very intense and complex, sculpted and fully present and detailed without being massive, showing tobacco, pepper, spices. Grand.