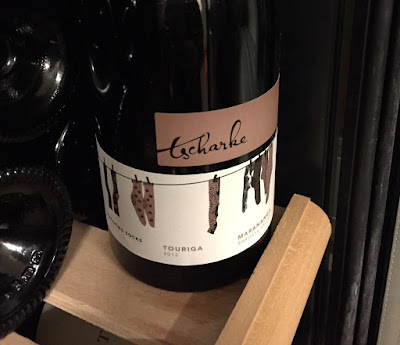 I'm an Old World man, but Avi Feldstein has turned me on to this winery, with the Potter Grenache. I'm not a Grenache fan, so the very fact I liked the Potter was enough to tempt me into trying this. I don't have a lot of experience with Touriga Nacional, except for the occasional Port and whatever Eyal Marom has had me taste. The other extraterritorial samples I've had were Yarden's (T2 or 2T or whatever that lousy liquid was called) and I'm almost certain d'Arenberg also had some Touriga based bottling. The Socks would definitely beat the crap out of the Yarden, which is an easy claim to make. Banana juice would beat the crap out of the Yarden. But I'm pretty sure it would also win over the d'Arenberg, assuming my memory is correct and such a wine does indeed exist. I'm sure the Socks would beat an hypothetical d'Arenberg Touriga Nacional wine, should a real one not exist.

Maybe it's about time I explained why I like this wine. I don't know the variety well enough to vouch that what I'm reading is an apt representation of what the grape is supposed to show, but there is a smoky, meaty bouquet that the wine has preserved beautifully, with notes of white pepper. The palate has a round, friendly feel with a firm, succulent backbone that is borne of juicy, acid driven freshness and savory tannins. Just a splendid piece - New World hygiene, Old World charm. I can't speak for other Francophiles, but this is definitely a welcome addition to my diet.

Avi also introduced me to Kalleske, Barossa, Clarry's GSM, 2013, which I revisited the day after I went through the Matching Socks. At 169 NIS, it initially  and ultimately gives less pleasure than the Socks, but that's mainly because it's a bruiser - a lithe bruiser, but a bruiser nonetheless - so it's just a little beyond the fringes of my personal tastes. Still closed and opaque, with black fruit, leather, pepper and earth, it really plays a better game of Chateauneuf than the originals do these days.
Kalleske Tscharke