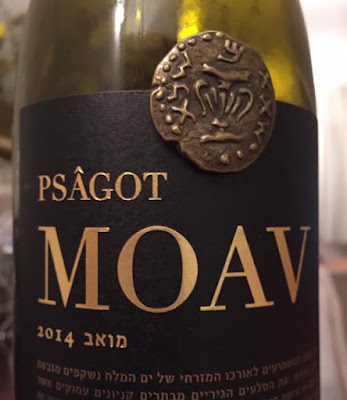 Psagot Winery is the third (by my count) station in the journey of one of the most unusual winemakers on the local scene, Ya'acov Oryah, whom I followed with great attention when he worked his craft at Midbar Winery. I'm not going to get into a political debate because the winery is in a West Bank settlement, I'll just say it clashes with my personal opinions, but I have great respect for Yaa'cov, personally and professionally, so here goes,

This is an "everything but the kitchen sink" blend of red grapes, mostly Bordeaux varieties, but that's not the real story here. The story is the aromas of fresh red fruit with a touch of rocks and the easy-going mix of sweet/sour and salty flavors. The finish isn't very long, and neither is this note, because this wine is meant to be drunk with gusto rather than discussed.

I'm hardly a big fan of Viognier, and I usually avoid it, but Ya'acov made a nice one back in his days at Midbar, even if it didn't convince me to purchase a bottle. I didn't purchase this one, either, but let's face it, I don't even buy Condrieu, the benchmark for the variety. Viognier has a distinctive bouquet, honeyed melons and other tropical fruit, with none of the nuances I look for, such as nuts, minerals, mushrooms. Then there's the palate -  the fatty, heady palate -  typically with high alcohol creating a hot, bitter finish. All of which are present here. This is a good wine that I think is an apt choice for those wanting to expand beyond the usual suspects available locally, but all in all, Ya'acov might perhaps consider using Viognier in a blend, even if it makes for less sexy marketing.

I hate Viognier. Well, actually, I don't. I don't hate any grape. But Viognier consistently wearies me. I wish Ya'acov would direct his talents elsewhere. For example, the next wine.

The Semillon based wines were the obvious teacher's pets during Ya'acov's Midbar tenure, and he seems to have picked up the plot right where he'd left off. This has the same signature of yellow summer fruit and chalk, that harks to the Bordeaux archetype that was the inspiration for these wines, with nice acidity and a quinine bitter finish. I never tasted the Midbar antecedents quite this young, so it's hard to make comparisons, but this will need a year or two to really get its act together, which is not to say you wouldn't enjoy it now.

For reference, I went back to the wines Yaa'cov made at Midbar and opened my last bottle of Midbar Winery, Semillon, 2009, which I've always considered Ya'acov's signature wine. Ya'acov had meant for it to be drunk at more or less this age. I think it was more intense last year, when it hit its peak, but it still has very pretty personality of rainwater, flint and peaches. I don't necessarily think intensity is a prerequisite for judging a wine to be at its peak, but it this case, at this age, I think it lacks a little oomph. (Aug. 28, 2015)

The 2010 is livelier, but close enough in character to suggest that any differences have more to do with the wine's age than vintage variations. In both cases, this is a wine that insinuates rather than flashes, which isn't a common approach around here. My problem with it these days, which I didn't see when I was so captivated with it in the past, is that I think you can actually combine that demure shyness with a little more force and presence - but that doesn't really happen with the 2009 and 2010 at this stage. And I think it takes time to get that balance just right, and Yaa'cov only had a few vintages to work with.

The 2012 makes me think maybe I got it all wrong. Maybe, despite Ya'acov's expectations and hopes, and mine as well, his Semillon isn't meant to be aged. The young version, which plays out as melons and salt, is so effortlessly charming that I just want to gulp down a carafe or two.. That might not have been Ya'acov's intention, but to paraphrase the Joker, why be serious all the time? This is so lovely that even though I bought quite a few bottles in a group purchase, I reneged and kept them all for myself.
Midbar Winery Psagot

Unknown said…
The beauty about the interest in wine is that it cuts through differences, political, religious and others. I still remember sipping wine with Lebanese winemakers in St. Émilion during the war between Israel and Lebanon. We discussed wine quality issues and have not considered touching upon politics which really enabled the creation of friendship. The mixture of politics with wine, which in my opinion is a grave mistake and it cuts down the branch upon which we, wine lovers, are sitting.
I was therefore disturbed reading your political comments about the winery being in Judea "clashes with my personal opinions". Chaim, your blog has to do with wine thus who really cares about your political opinions?! When I write about the Winery of Zorah, one of the best in the land, should I precede with a statement that the political views of the manager and wine maker "clash with my personal opinion"?

Talk to the oversees sales managers of Israeli wineries and you will realize that the left wing Israelis, telling the gentiles what they think that they want to hear , are to blame for most of the boycotting of Israeli wines. By now you probably got the drift that whoever hates Jews, hates them not because what they do but just because of them being Jews. Being a "good" Jew makes no difference.

2GrandCru said…
Come on, I referred to my political opinions in the most cursory way.