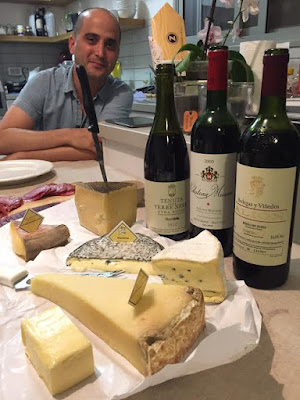 A winemaker,
A wine blogger or two.
A wine importer.
Irit Kozak.

An Israeli white.
A Spanish red.
A Sicilian.
A Lebanese.
A French for dessert.

This is... different. Not great, but different. Leesy, funky and lightly minerally. I could have tried to write down the various fruit descriptors, but they were hardly the main story here: the story is that here is kinda weird wine that so escapes the usual mold it might we well have come from outer space.

It's been years since I last had this signature Lebanese wine. Last time I had it, it was a Caberent Sauvignon/Cinsault blend and now it seems there's also Carignan in the blend. There's elegant fruit here, embroidered with mildew, which, along with the savory acidity, reminds me of Rioja. Or something Spanish, anyway. Probably the best Musar at I've had - at the very least, the most palatable.

Terre Nere rocks, always, even this three year old from a hot vintage. A soft yet prominent tannic structure gains form and body with air. The fruit is savory, elegant and poised, red at first, turning a wee blacker in glass, and as always with Terre Nere, the acidity is terrific.

It took me several tries over almost a decade  and across multiple decades to like this modern Ribera. Sometimes. It seems it just needs a decade to mature and become funky, multi layered and for the ripe, modern fruit to tempered by juicy acidity and a mature, Old World charm.

For me, botrytis works better in the Loire than in Sauternes, and here it's played with finesse, merging sweet and spicy notes. Huet comes with a almost a century's worth of reputation, and with a price tag to match, but this is a terrific value that could trounce almost any dessert wine on the local market.