This is a great value, being a declassified village wine. It smells like someone sauteed pears and apples  in Atlantic salt and sprinkled them with roasted almonds, and actually tastes fairly similar, with a delicate salinity. This is loads of joy. (Sept. 3, 2015) 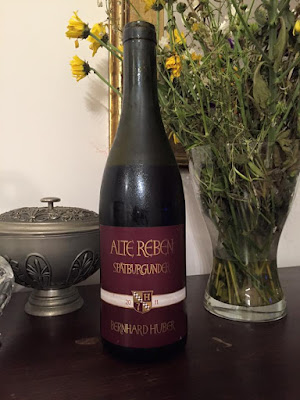 This is a blend of second wines from this Pinot master's Grand Cru holdings and comes across as fine Volnay Premier Cru, an almost intoxicating nose of red cherries, flowers, exotic spices. Very feminine, with languid mid palate that goes hand in hand with that gorgeous, complex nose, and actually almost tastes floral. Just about the best German Pinot I've had so far, and I'd say it needs a couple of years to peak and will hold for 3-5 years more - because it not only thrives on acidity, like most fine Pinot, but is relatively tannic, with fine balance, and seems to say "I'm not there yet". (Sept. 9, 2015)

I guess this is just what I'd expect from a non-premium vintage bottling: it has depth and complexity, but is not as impressive as the big boys, or as special as the growers' stuff, a Champagne to drink rather than to impress. But it's got all the bready/buiscuity nuances you'd want from a Champagne that has aged well, so let's just call it a luncheon Champagne. (Sept. 10, 2015)

About GBP at the Heathrow Duty Free.

Clos des Hospices is a monopole parcel in what is arguably the best Chablis Grand Cru of them all. But, this is at best only good right now, with apple peels and a tasty, salty finish. At worst, it is something of a middle-aged dullard, which I'm willing to overlook, based on part experience with the domaine, and chalk it up to an off or dumb bottle. (Sept. 11, 2015)

This is a Cabernet Sauvignon, Merlot, Syrah blend. 2010 was a hot vintage (even for Israel), but the Shoresh manages to balance the sweetness with good acidity on the finish that creates a salty effect. Loaded with mineral inflections as well as hints of black pepper, it offers Old World restraint, despite the ripeness - since Europe has its share of hot vintages, ripeness isn't in itself a New World characteristic, but rather extraction and ripeness at all cost are, which this wine avoids. Very complete - the heat of the vintage worried me into opening it now, but this is ideally a wine to open at seven years old or more, not five. (Sept. 12, 2015)

I used to have so many jokes about Gewurztraminer, I still do, but I've told them all. Fortunately, this is one Gewurtz that doesn't deserve to be mocked. Mainly because it's a young dessert wine so its sweetness counterpoints the extracted spiciness that can overwhelm the mid-palate in dry versions without becoming cloying. So that's a winning, strategic decision right there. The nose, of course, is never a problem with the grape. In fact, one of the reasons I think it's a slut of a grape is because it seems so easy to coax those complex, deep aromas of honey, cinnamon and rose petals. But the end result is so winning, I'm going to give Eran Pick full points for getting the slut to stop putting out. (Sept. 14, 2015)

I love this wine, but this bottle seems to lack the verve of previous bottles, which, if I were the score it, would bar it from crossing the 90 point line. Although the acidity is great as always. (Sept., 15, 20150

I loved Doron Rav-On's debut 2012 vintage, but somehow skipped the 2013 Chardonnay. What I liked about the 2012 was how Bourgogne-ish it was, specifically, it reminded me of the Macon. This is more of the same, better, in many ways, because it offers the same dose of minerals but without the tropical notes that the 2012 showed. In fact, it is so much more of the same, and shows such lithe, focused grace, such appropriately measured acidity and salinity, that it might be the best Israeli Chardonnay I've ever drunk. (Sept. 18, 2015)

A decent, cutely rustric, dry Gewurtz, that leans towards grapefruit rather than lychee, with the typical spices very tamed aromatically, and no hint of rose petals. But every now and then it flashes daggers. (Sept. 19, 2014)

I'm not always up to the tannic and alcoholic crunch of Big Time Nebbiolo, but Barbaresco is usually mellower and this, at 13.5% ABV, manages to find a sweet spot between fragrant delicacy and flavorsome intensity, showing typical perfumed red fruit and dusty/tarry spices, with lingering salinity. (Sept. 22, 2015)

Another winner from Matrot. This is as dense, rocky, marine and acid driven as a Chablis Grand Cru! So what makes it a Meursault? A hint of creamy, pear-laden fruit? (Sept. 23, 2015)

The purity, depth and minerality of Riesling fruit chez Dönnhoff combined with the mushroom notes of a Champagne. What sours it is the lack of persistence in the mousse.(Sept. 25, 2015)

I've been meaning to delve into Pellé, because the Loire is one region I'm always eager to explore. This has a remarkable interplay of ripe apples and peaches and pungent freshness. There's a modicum of minerals, but little of the greenness you find in New Zealand sauvignons. (Sept. 27, 2015)

For 20 NIS more, and one more year further from harvest time, you get a deeper, more complex, more interesting wine, with a mineral funk for the afficiandos. Oddly, after a while, it became too ripe for my tastes. It might need more time, but right now, I prefer the cheaper bottling. Whatever, these are very good everyday whites, solid and efficient. (Sept. 29, 2015)

I had the feinherb last year. This being 10.5%, I suspect this is the same wine with a different label. The Karthäuserhof's site only seems to have only one Schieferkristall bottling. Whatever, this is steely and bracing, very pure and linear. And within that focus is a decent amount of complexity and texture, (Sept. 28, 2015)

This hails from Trentino and is labelled  Teroldego  IGT instead of Teroldego Rottaliano DOC because the local authorities thought it too atypical to be awarded the more illustrious designation. Whatever. This is soft and friendly - rocky, yet succulent, with soft tannic complemented by savory acidity. Also, the kind of black pepper that would usually make you think of the North Rhone, if it weren't paired with chives that make you think of, well, Italy. The kind of warm, interesting wine that Wine Spectator often (deservedly) turns into a best-seller. (Sept. 30, 20150